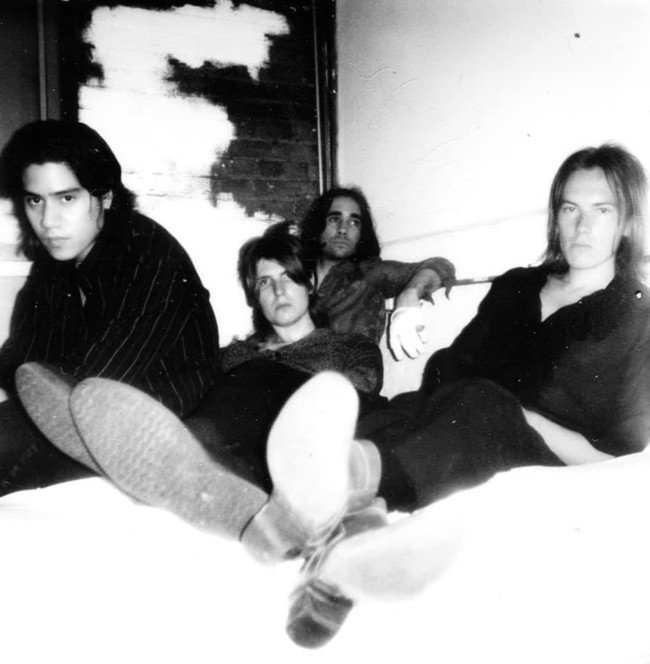 Beechwood’s new album Sleep Without Dreaming is slated for a January 2022 release and its first single “Front Page News” offers fans of the NYC based four piece a glimpse of the band’s new material. It follows their 2018 release Inside the Flesh Motel with the recent addition of new bassist Jensen Gore but the band’s customary gritty rock attack with a melodic slant remains intact. Beechwood is serving us rock and roll the way it is supposed to be – dangerous, smart, and ready to fight.

Drummer Russel Yusuf brings us into the track and other instruments soon fall in. Guitarists Sid Simons and Gordon Lawrence open their playing with chiming guitar note dinging in the mix with warm bell-like clarity before Yusuf quickens the pace and we begin the track in earnest. Beechwood builds the song around their twin guitar attack but the echo-laden production neuters its power; you can hook into the song’s snappy riffing but it takes a little work.

Beechwood, nevertheless, has a winning rock track here. The vocals are very reminiscent of Paul Westerberg’s singing for seminal 80’s-90’s rockers The Replacements but it isn’t a slight to say so. Any would-be rock band who dares to write and record even a single song works in the shadow of what has come before and Beechwood is no different. They do an exceptional job, however, balancing the past and present for listeners. It’s a track steeped in rock and roll, but thoroughly modern.

The lead guitar is effective without ever going overboard. Anyone searching out lead guitar gymnastics from Beechwood should look elsewhere. It is fiery, however, and its melodic virtues elevate the song several notches. It’s this emphasis on melody that separates Beechwood from their peers and contemporaries; melody, like a guitarist’s vibrato, leaves a signature. You wouldn’t mistake Beechwood for anyone else.

The band’s roots in Simons and Lawrence’s long-lasting friendship, dating back to childhood, is Beechwood’s secret weapon. The two guitar players are familiar with the ins-and-outs of each other’s playing and compositional skills and share the same creative vision. It contributes to Beechwood having a much more unified and consistent approach than similar acts.

Their new single bodes well for Sleep Without Dreaming. Four albums deep into their careers and Beechwood is still writing and recording music without compromise. This is rock and roll on their terms and they intend on bringing us along for the ride. “Front Page News” doesn’t concern itself with the latest trends or panders for listener’s attention. The four musicians involved first satisfied themselves trusting that, if they did, the song would satisfy others as well.

It’s more than satisfying. It isn’t without flaw, no song ever is, but rock fans of every stripe should celebrate the fact that a four piece such as this continues holding the line for guitar-driven music. Long may Beechwood continue to spread the good word near and far with songs such as “Front Page News”; longtime fans will love it and newcomers will as well.