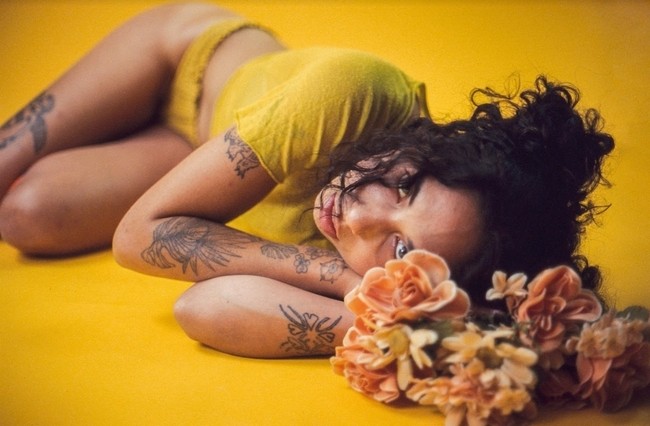 These days, Indigo De Souza belongs to the world. That’s what happens when you make an album as explosive, daring, impeccably realized, and exquisitely performed as Any Shape You Take — everybody wants you. In early autumn 2021, it’s no exaggeration to say that there are two kinds of indie music fans: those who’ve fallen in love with Indigo De Souza and those who haven’t heard her new album yet. And as that second category shrinks, the first one gets bigger and bigger. That’s why she’ll be out touring the country for the rest of the year with The Slaps, Dan Wriggins, Horse Jumper of Love, and others. That’s why she received a “Best New Music” designation from Pitchfork, and raves from The Line of Best Fit, Paste, the NME, and other music publications all over the globe.

But Indigo De Souza also represents someplace very specific: Asheville, North Carolina, a medium-sized mountain city with a reputation for creativity. Before De Souza attained a national reputation, she was embraced by Asheville’s famously offbeat arts community. In the clip for her latest single — the unabashedly romantic and danceable “Hold U” — De Souza returns the compliment.

To truly understand how deeply embedded the “Hold U” video is in the Asheville underground, it’s necessary to engage with the impressive résumés of the clip’s directors. Honey Simone and Garnet Fisher are two of the artists and organizers behind Different Wrld, a multi-ethnic, multi-media, LGBTQ+ friendly performance space and offbeat apparel shop in the city. They’ve shot the video at Indigo’s home, a converted old church, and invited some of her most outrageous friends to participate — and the video they’ve made channels the fighting spirit and legitimate tenderness of the arts scene in one of America’s unique cities.

It also couldn’t be any more different than the clip for “Kill Me,” Indigo De Souza’s dark but insanely catchy prior single. “Kill Me” is a troubling song and required a clip with a little menace in it (even if that menace was mostly directed toward pastry products, which were squashed with spectacular abandon). “Hold U,” by contrast, is a celebration, and Indigo De Souza, Honey Simone, and Garnet Fisher are throwing a party. Naturally, Indigo’s home is the community and host space, and the room looks inviting and comfortable. But it’s the people at the party who are the real attraction here: they’re wonderfully queer, gently defiant, erotically forward and effortlessly stylish, mutually supportive, and delightfully welcoming. Indigo De Souza is one of them, and she makes you feel right at home.