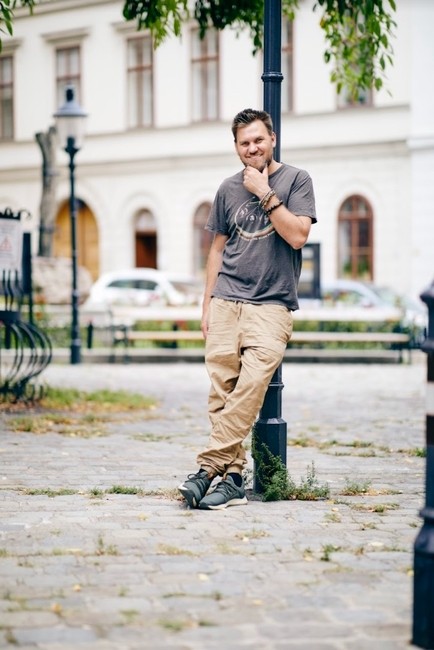 Chris Beer sings in the voice of a friend. He’s warm, conversational, direct, jocular, encouraging — he sees you, and he wants you to have a good time. Beer doesn’t bellow or whisper, and he never gets too dramatic. Instead, he taps you on the shoulder, gives you a smile, and introduces you to the song at a comfortable emotional pace. Never rushed, never tense; always relaxed, always measured, always thoughtful: Chris Beer is the sort of guide who anybody would be happy to follow.

His songs are similarly approachable and similarly frank. The Austria-based singer-songwriter loves playing with language, melody, cadence, and delivery, but he never lets his desire to experiment get in the way of his desire to communicate. Beer’s music incorporates elements from many styles — classic rock, campfire-singalong folk, international reggae, irresistibly catchy pop — but remains resolutely his own. It’s a pure expression of his optimistic outlook, his faith in humanity, and his love of life.

Take “Nothing Like,” his latest single, and a song that sums up the themes of his upcoming set, Who We Are. It’s the kickoff track on the album, and it feels like an enthusiastic introduction and a statement of purpose. In plainspoken language, Chris Beer advises his listener to seize the day — and reminds us that there’s no greater feeling than the one that comes from full engagement with our desires. Whatever you’re chasing, Beer is the buddy who wants you to go after it. He also wants to take a stand against racism, and shares a desire for deceleration in our society – with music that is laid-back, soothing, and feeds that longing. He’s put this sentiment to music that echoes its inspirational motivations: music that’s immediately approachable but thoroughly energetic, humble-sounding, tuneful, bright. He wants you to sing along – and, in so doing, internalize the hopeful message.

Chris Beer appears in the video for “Nothing Like” but notably, he’s not always on his own. He’s shown with his wife and his two children, beaming back at the camera with the contentment of a man adjacent to the source of his joy. The rest of the clip is pure action of the best and the most inviting kind. Kids jump into the water feet-first, waves crash on the rocks in front of awed beachcombers, bicyclists crash along on dirt chalk roads, mountain climbers hoist each other to the pinnacles, potters mold clay into handsome vessels. The analog feeling and the magic of losing yourself in the act of creating (taking a picture, recording a song, building a shed, cooking your own food, molding a vase) also mirrors Beer’s longing for deceleration and provides a counterpoint to the trend of wanting everything to go as fast as possible, to have machines for every little thing. It’s all beautifully shot, and wonderfully inviting, and compelling in its thematic consistency. Get out there, Chris Beer recommends. A beautiful world awaits you.