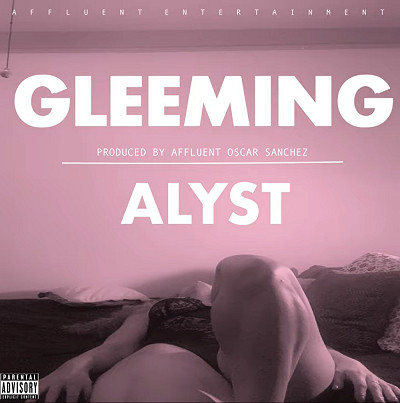 Certain kinds of charisma just can’t be taught, no matter how willing the pupil or even how capable the teacher happens to be, and if there’s one rapper rocking a charm that is all his own this season, it’s ALYST. ALYST’s new single “Gleeming” with Affluent Oscar Sanchez has been scoring a lot of attention from the critics recently, and although it’s built with a conventional framework, the performance it contains is anything but on par with the typical in rap today. Hip-hop’s most incredible influencers are coming together on the strength of experimentalism in 2021, and to me, this is one player whose name needs to be in the conversation when discussing top-tier young talent in the game at the moment.

ALYST’s vocal isn’t overstated, and this was a feature I noticed right from the start in “Gleeming.” Though he’s got a lot of reinforcement from Affluent Oscar Sanchez, he’s setting the pace essentially by himself in this piece, and giving us the kind of smoothly-integrated leas in the master mix that I’d deem more akin to something a veteran would produce than anyone on the rookie side of the spectrum. He sounds both sure of himself and incredibly open to evolution, and there are moments towards the hook in which the latter feels like it’s transpiring before our very ears. This is no throwaway single, nor does it have the cosmetic trappings of something that seems even remotely halfhearted in terms of aesthetics and artistic design.

The master mix here is definitely as tight as possible, but this benefits the technique ALYST is looking to foster beside the pressurized arrangement all the more. Rather than trying to compress a lot of detail into a single, he’s spreading out the sonic warmth and giving us a vicious verse to serve as the continuity between otherwise conflictive components, which on its own is something that makes “Gleeming” worth looking up this fall. Premium hip-hop collaborations have been coming down the pipes like nobody’s business in the past couple of years, but this is one of the first indie cuts I’ve heard released in the past couple of months to sport as much ambition as it does eloquence, as opposed to one being more present than the other.

If “Gleeming” is giving us a look into what the future is going to sound like for ALYST, I believe he’s going to join the ranks of the hottest players in mainstream hip-hop quite soon. His upcoming album is already getting a lot of love across the American underground, and with a little more attention from the foreign press, my gut tells me that it’s going to be one of the more credible breakthroughs from a purely indie talent to hit record store shelves in a while. ALYST is straightforward and crisp with his words, but he’s also got a dirty, loose, easy-riding element to his artistry that is begging to come undone here, and I’m looking forward to seeing and hearing it in action a little more soon.