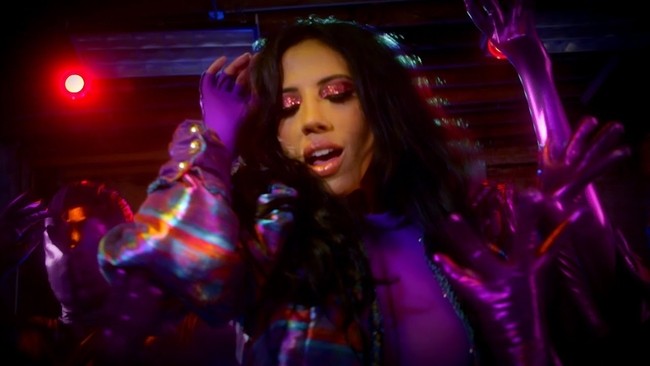 One of Cecy Santana’s many five-star qualities I love is her understanding of her place in a musical lineage. She views herself as the next logical step for a genre producing such era-defining talents as Gloria Estefan, Lady Gaga, and Sade, among others. Her musical output definitely bears this out.

Santana is building on each success with even bolder goals for the next. The gifted Brazilian performer’s new single release “You Make Me Say” boasts a handful of potent remixes from names such as The Dolls, Charlie Babie Rosario, and BMonde, as well as others. I believe it is clear after a single listen to this song that more than talented DNA via her father guitarist Carlos Santana has touched this young woman. The spirit of true inspiration sparks from her voice and her rare talent for completely inhabiting a composition captured my attention from the outset.

Flashes of synthesizer color the energetic percussion opening The Dolls’ remix before it briefly dissipates. Additional synthesizer lines join the song when the pace resumes. The lyrical content is limited, fragmented by design during some passages, but this is par for the course. Santana, nonetheless, throws all of herself into the vocal. She’s grabbing possibility by its figurative throat while still tailoring her voice to the backing track’s needs.

Charlie Babie Rosario’s club remix of the song begins in a much different way. This version of the track introduces us to the lyrics from the outset and the remainder of the remix focuses much more attention on her voice. The musical part of the equation isn’t ignored. She highlights the synthesizers, however, much more than the percussion and lowers the steady pre-programmed thump to an insistent pulse.

Another side of the song emerges with Bmonde’s remix. It’s a distinctly darker framing of “You Make Me Say” than Rosario and The Dolls, but still occupies the same musical territory. It opens with something approaching a near riff, stuttering synthesizers casting an edgy spell over the song’s beginning moments. It will be a favorite for many because it stands apart from the rest yet, without question, still provokes the same intense physical response.

Even those normally dismissive of dance pop will enjoy these remixes. Each one crackles with undeniable energy and the heart of the song, no matter the remix, always remains Santana’s transformative voice. She sounds profoundly human here. Her voice captures the longing, lust, and love for life we expect from the greatest singers and it’s exciting that she’s just begun. The road ahead of her is lit by many suns.

It isn’t making some sort of never before heard statement about life’s meaning. It’s a forthright statement of desire and, in the end, every bit as powerful thanks to her. Voices like this connect with something within each of us that throws away the cares and concerns of the moment and prods us to embrace the gifts of now.