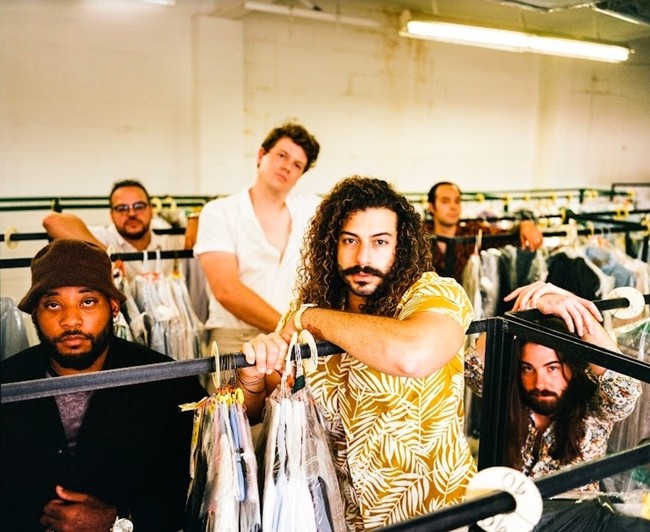 It’s part of the city’s official identity because it’s true: weird things flourish in the Austin sun. The capital of Texas has always welcomed unique people, unique ideas, and unique sounds. If you make music in Austin, you’re expected to be one of a kind. Nané, the current toast of the Austin underground, does not disappoint on that score — or any other.

Nané, the band’s self-titled debut album, technically arrived in the autumn of 2020. But it’s fair to say that few independent releases have cast a longer shadow across Austin in 2021 than this one has. It’s an electrifying fusion of psychedelic funk, raw disco, sweet soul, indie R&B, leftfield Latin music, outer-space sounds, alternative hip-hop,’ 70s-inspired sophist-pop, and a few genres that haven’t been invented yet. The famously idiosyncratic radio station KCRW is already a champion; The Chronicle sings the group’s praises; The Austin Statesman predicts the band could be the city’s next breakout. They’ve rocked SXSW, and they’ll be playing both weekends at this year’s Austin City Limits Festival this month. Fearless, huge-voiced Dominican-American frontman and bandleader Daniel Sahad has everybody in town chasing his shadow — and he’s welcoming everybody into the club. Nané is inclusive, multicultural, enthusiastic, and friendly as a puppy. Think of their shows, and their entire act, as an open-invitation party that shows no sign of slowing down.

“Seventeen,” the band’s latest single, exemplifies everything Austin already loves about Nané and everything that the rest of the nation is presently catching on to. Is this rock? R&B? Soul? Or delicious, unclassifiable alternative music? It’s all of these things at once, and from the first beat to the final cymbal crash, it’s thoroughly infused with Daniel Sahad’s irrepressible personality. While Sahad is the star and the focus, the rest of the instrumentalists in the group are worthy of celebration, too — and they make every funk chord sting, every snare beat rumble, and every throbbing bass lick shake the house.

Quarantine is tough on everybody, and for someone with as much energy as Daniel Sahad, it’s nearly been unbearable. In the “Seventeen” clip (that he co-directed himself!), he’s warned to stay off the streets — but when he gets a text message from a fetching young woman, he can’t help himself. Soon, he’s out the door in a fever dream of deserted streets and people in hazmat suits, and when he reaches the home of the woman he’s chasing, he discovers to his horror that her intentions are considerably more sinister than he expected them to be.