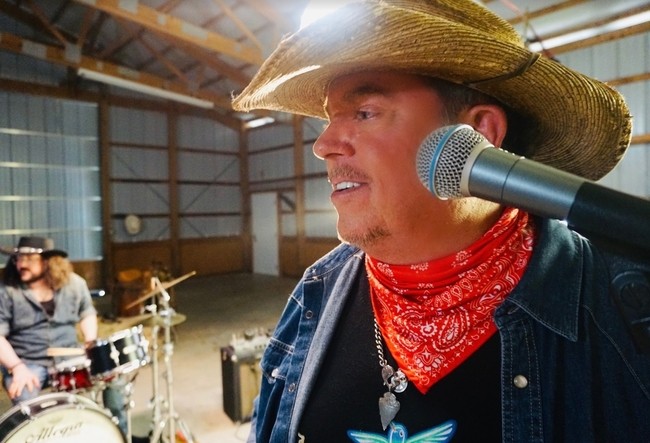 The voice takes people by surprise. It’s deep, resonant, knowing, a little wary, road-tested and heavy with experience. For some listeners, it’s reminiscent of Johnny Cash; others liken it to Waylon Jennings, or Chris Stapleton, or even Springsteen. Yes, Jim Waneka has a voice to follow — and he writes songs that suit its power, depth, and flexibility. When “I Ride Alone,” his first single, premiered in July, country fans were struck sideways. Who was this artist? Did he come out of nowhere?

But real singers never come from nowhere. Real artists are always rooted in the soil: they represent a particular time and place, and they tell stories that feel true because they are true. Jim Waneka represents the Colorado towns where he was born and raised. When he writes and sings, he channels the spirits of the people he knows and the many places he’s been. Take “A Different Man,” the timely, heartbreaking follow-up to “I Ride Alone.” It’s a tale that’s become all too familiar to Americans — especially rural ones from military families. When Waneka sings of a soldier whose life was upended by his time in combat overseas, he doesn’t just make the physical injuries palpable for his listeners. He shows us the psychological scars, too.

“A Different Man” is, pointedly, set during the long conflict in Afghanistan. But to write it, Waneka drew from his recollections of past American interventions — and his family’s recollections, too. The result is a song that sounds and feels like America: deeply grounded in the country’s history and firmly in touch with the country’s pain. Just as he did for the rollicking “I Ride Alone,” Waneka has matched his story with music that evokes country and Americana classics, with strummed acoustic guitars, rich B-3 organ, drumbeats that alternate between martial and funereal, and gorgeous harmony vocals on the choruses.

The clip for “A Different Man” shows us that band in action, and it’s an impressive thing to see: Jim Waneka has assembled a group of stellar musicians, and their commitment to the song and their faith in the bandleader is total. Waneka is a born storyteller and an effortlessly emotive singer, and his empathy for his main character is visible in every frame he’s in. There are plenty of action shots of soldiers, too, and the terrible consequences of war: gunsmoke, flag-draped coffins, the shattered faces of family members. Waneka closes the clip with an entreaty to support NGOs that care for veterans, but even before he flashes those words on the screen, he’s already made a powerful case for compassion.