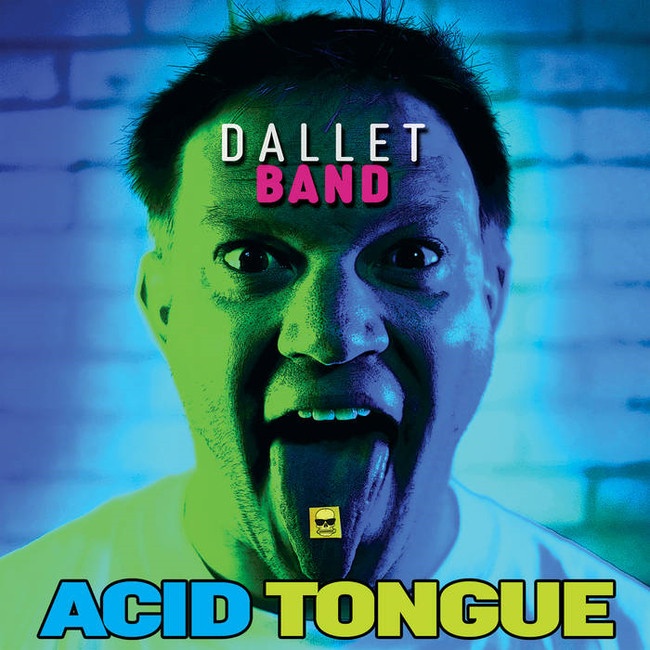 The Jeffery Dallet Band, or sometimes referred to as The Dallet Band, returns in 2021 with a new release entitled Acid Tongue. It is the band’s longest studio release to date featuring nine tracks and the larger songwriting canvas never taxes the creativity of Dallet and his bandmates. Their music owes obvious debts, without question, but there’s never any point during this release when you hear the principles engaged in outright imitation. Dallet and his cohorts put an individual stamp on each of the cuts while inhabiting a familiar structural and instrumental landscape.

Much of the individual stamp comes through in the lyrical content and Dallet’s vocals.  The former begins on a high note with two character studies opening the collection. “Gypsy Jewel” is a compelling first song, a document of desire, but the object of his longing poses threats as well. He frames the song’s subject as a source of inspiration, as well, and blends it seamlessly with the largely acoustic backing. His slightly nasal vocal tone enhances the track’s slightly quirky character but there is immense sensitivity present in his phrasing.

The second track, “Sweet Cindy”, is a clear highlight. It is, as mentioned before, a character study and Dallet’s subject is grittier than before. There’s no romance here, no paeans to powerful and slightly mysterious females, but instead a down and dirty look at dysfunctional co-dependency. “Sweet Cindy” hinges musically on a straight-forward guitar riff and the vocal arrangement; Dallet is wise to sweeten its dark subject with a singalong refrain. It isn’t difficult imagining this song as a potent live number.

The near seven-minute long “Sinner’s Dance” sways in slow-waltz time from beginning to end and multi-instrumentalist Jon Von contributes elegant piano playing. It is the Dallet Band’s take on the traditional rock/pop ballad and one of Acid Tongue’s most effective songs.  The lyrics during songs such as this are very different than earlier fare; Dallet abandons their pointed and economical style in favor of more complex wordplay.  “45 Song” has strengths and weaknesses depending on your point of view. There are listeners who will cheer on the band’s poetic takedown of a recent President while others will roll their eyes at another mention of the men’s name or resent politics barging, however artfully, into their musical experience. They deserve credit, however, for writing a “current events” song that won’t soon sound as dated as some. The musical arrangement is enjoyable and, once again, adopts a largely acoustic template.

“Skin N Bone” hits the desired ominous note. It’s a slowly evolving track, built around guitar and vocals, and the dramatic arrangement holds your attention throughout. There’s a fiery attitude here, simmering beneath the song’s surface, and a sense of barely held restraint generating palpable tension. It revisits the poetic diction of the earlier “Sinner’s Dance”, though it doesn’t go quite as far. There’s an impressive amount of diversity underpinning Acid Tongue and it should garner ample critical and popular attention for The Jeffery Dallet Band.