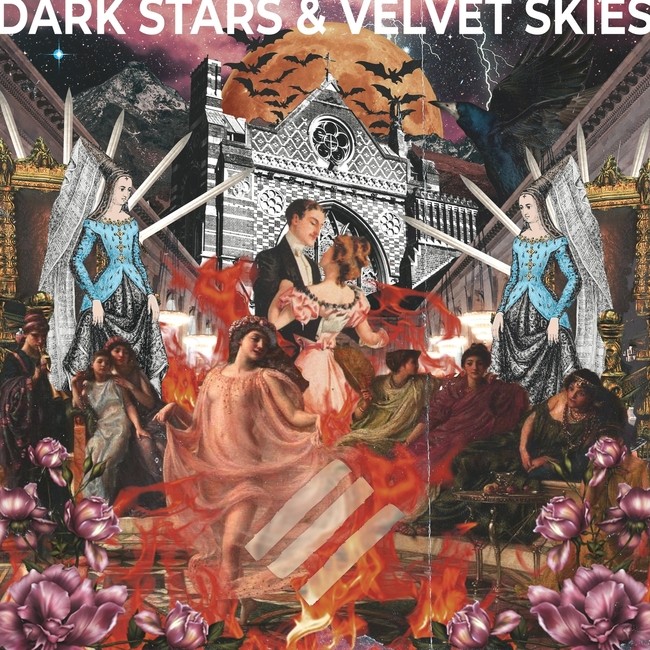 Affirming vocals give way to an angst-ridden riff as we enter the darkly melodic opening cut “The Long Way Down” in Burn the Ballroom’s Dark Stars & Velvet Skies this summer, the first couple of bars in this track indicating that polished harmonies and harrowing grooves are going to come standard as we get deeper into the tracklist. The mood is rife with melancholy hanging over the anxious rhythm of the percussion, but we’re not quite drawn into the elegiac qualities of the music through the lyrics. Contrarily, there’s a sense that we’re on the outside looking in rather than relating to the singer’s emotion; we’re in the theatre of pain, with his voice playing a lead role in what will soon become a play steeped in tortured self-awareness and honest pleas for affection.

“Still,” the lone track here to feature a music video, is the obvious choice for the lead single, and not because of the dynamics that make its hook so heavenly, I might add. The absence of a bludgeoning bassline in the swinging beat makes me long for the days of simplistic alternative rock songwriting being the norm in the industry, as opposed to all of this postmodernity nonsense flooding the air around us with needless eclecticism best left on the sidelines of any major project. Burn the Ballroom is going retro with the barebones construction of “Still” and the more balladic “Calm Down,” while adeptly avoiding old fashioned sonic cues I’ve been hearing in pop-punk throwbacks from MGK down to The Persian Leaps.

“10 to 1” is unstoppably indulgent and doesn’t care if you dig its excess – its fabulousness stands on its own in this tracklist as a reminder that to be a genuine rockstar, you’ve got to love the material you’re playing even more than the listener does. “Fall With Me” is equally insular in terms of its aesthetical make-up, but with one big difference; it features the most colorful, striking guitar and synth play on the record. Sure, the synthesizers do get a little more of the spotlight than I might have afforded them had I been in the producer’s chair during the mixing of the chorus, but the post-punk element they impart is still one I wouldn’t change for anything.

We meet the conclusion of Dark Stars & Velvet Skies in an epic, progressive punker in “A Ship That Shared Your Name,” but while this song could be framed as a deep cut exclusively, it’s flamboyant melodies have ‘spotlight single’ written all over them. Truth be told, this could probably be said for all of the songs on this extended play, and that’s why I think Burn the Ballroom is getting mountains of publicity and praise from all the right critics in the game this summer. They don’t have an edge with their scene or even their genre; they’ve got originality and personality, the latter being the biggest element I don’t hear from the major label players in rock anymore. I wouldn’t change a thing about this formula, especially seeing how well it’s working out for them in Dark Stars & Velvet Skies.