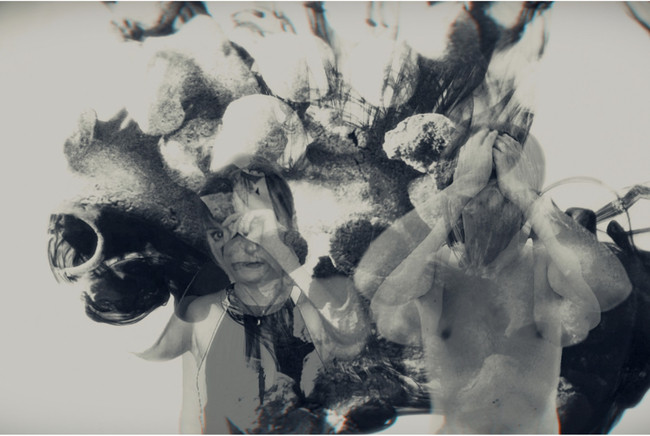 GR^VE (pronounced ‘grave’) is a newly formed duo composed of Seraph on vocals, and music by Carbon. The pair have come together by what they described as a mutual understanding of our common mortality. Their mission statement is to provide a necessary soundtrack to all who listen to their upcoming multimedia releases of video art and streamable music in a single format. Recently sharing their new single and video for “In Fire,” this starts a whole new unique and notable realm for the group.

Seraph from the group shares of the track:

“In Fire” is the first video where we actually present ourselves physically which was a little intimidating on my part. It’s easier to let the music speak for itself where there is a vulnerability in associating the person with the music. We felt that in order to present the story in the way it was intended it was important to do so. The song and video are representative of both the external doubts we are fed from the world and those more dangerously coming from within our own psyches. In moments of anxiety and depression we find the will to continue on and push ourselves. This is ultimately the meaning behind the song. Not in the taunting verses, but the refrain. I hope this resonates with people as I feel we all experience this in some way.

We used the imagery of an 80’s horror film in which the antagonists are expressing those doubts to an inner child. No children were harmed in the making of this video. We both love b-horror movies so this was a fun project to do. The effects are cheesy in order to both sell the 80’s b horror look and to not trigger anyone. It is intended to evoke how media can influence and cause self-esteem issues from a young age. We are presented with information from birth to confirm to a worldview that may no longer exist. The world is changing. It is not kind by nature and it is up to each of us to find our place in it.”