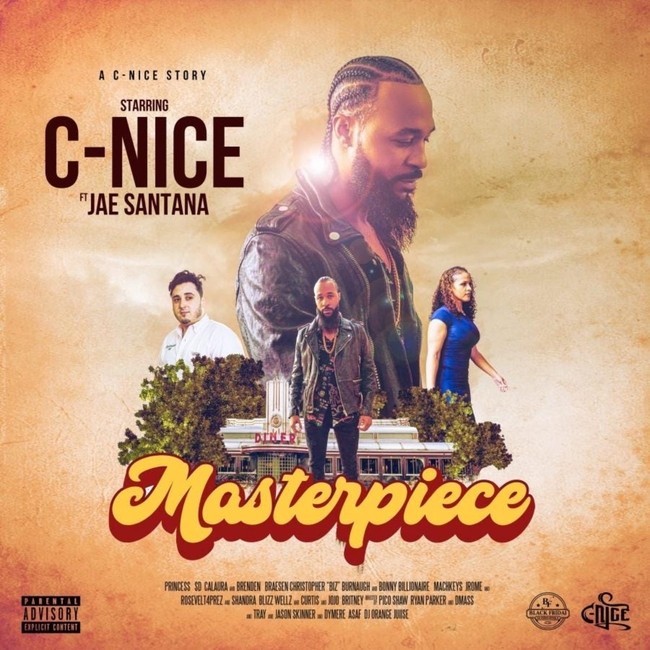 2020’s “Small Talk” gave us a much better look at C-Nice’s slow jam skills than anything he had released previously, but in his new single with Jae Santana, titled “Masterpiece,” he takes his game to the next level with melodic elements much stronger than I expected to hear. Though the harmonies and verses come together rather simply for these two, the music video for the song highlights the implied complexities of the compositional structure, and demonstrates the ‘it’ factor C-Nice has been gaining so much attention for since dropping his debut LP some eight years ago.

The rhythm in “Masterpiece” is relaxed, but the execution we’re getting from these two vocalists definitely has some bite. Santana’s owning the harmonies, but the real lyrical lion to be impressed by here is C-Nice, whose command of sentimental lines and smooth rapping sets a new standard for his career moving forward. He’s got our attention from the jump, and he doesn’t waste a second at center stage giving us pointless virtuosities behind the mic that neither serve the narrative he’s building nor the audience he’s got in any capacity. The efficiency is here, but so is an intimate relationship between artist and medium no amateurs can front into existence.

I really like how inviting this hook is, and because of Jae Santana’s stylish presence in the mix, it gives us just the right dose of controlled indulgence to impart buoyancy to an otherwise straightforward and unfanciful rhythm. This is black and white hip-hop songcraft, but the players who are taking it up are anything but typical when it comes to talent. Through the use of a simplistic template, their best abilities shine as they should in this piece, and give us a better idea of what they might accomplish together if given the opportunity to collaborate again.

You can’t go wrong with the swing of the beat as we get closer to the end of the track, with C-Nice’s rapping getting noticeably looser as we zero in on the finish line. He never sounds robotic, and his connectivity with the percussion is akin to what Santana is doing to the bassline in molding it for his own lyrical purposes. This track gives us a look at something we usually don’t get out of studio work, and that’s witnessing two artists sculpt a sonic backdrop into something that not only authenticates their story but advances their emotions through sound.

Players like C-Nice are the reason that the international circuit continues to respect the legacy of the iconic Long Beach music scene and, moreover, why it remains one of the most vibrant and vital parts of the SoCal underground today. With Jae Santana, he gives us equal parts soul, hip-hop, and classic R&B charisma wrapped inside of a music video in “Masterpiece” that doesn’t rely on visual fireworks alone in getting a big response from viewers. C-Nice is playing with the elites, and his summer soundtrack is the product of both understated experience and a tremendous amount of well-cultivated creativity.