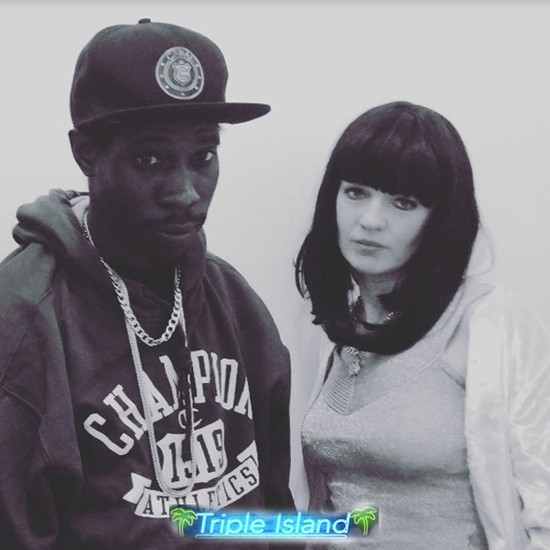 Jungles are misunderstood. They’re places of danger, certainly — there are wild creatures there, and conditions can be pretty extreme. But jungles also contain wonders: fascinating sights, beautiful inhabitants, the quick pulse of life lived at the edge of excitement. In the jungle, no one is ever bored. When Triple Island describes their native Flatbush as a jungle, that’s what they’re getting at. They see Brooklyn as a place of endless possibility, dizzying variety, and untamed emotion. You’re welcome to explore as much as you dare.

Triple Island is the neighborhood in microcosm. All three members of the group represent different musical traditions: the propulsive beats of Haiti and St Lucia, the urgency of Brooklyn pop, the folk melody of the French Caribbean. Rells, Cuppa, and Neysa are all exemplary stylists, and when they come together on a track, they’re a living lesson in the power of coexistence and cultural cross-pollination. Their music is such a seamless amalgam of sounds and styles that it seems to exist in a place beyond division — a place as polyglot and multi-sensory as the jungle, where anything can happen.

“FÊTE,” their first single, started the party with a whirlwind of sound and rhythm: it introduced Rells as the quick-spitting rhymer, Cuppa as the mesmerizing reggae-influenced chanter, and Neysa as the irresistibly sweet singer. “Flatbush Jungle” draws the listener deeper into the group’s unique sound and artfully blurs their roles; they’re learning from each other, even as they respond to each other. Produced by Ray Angry, the track also features well-known producer/keyboardist Tony AI (of The Roots) rapping in Kreyole towards the end of the song. A native of Miami, Tony AI has been best friends with Neysa for 15 years.

Neysa herself is in charge of the camera for the colorful, energetic clip for “Flatbush Jungle.” She’s bringing us to the heart of her neighborhood — its stores and streetcorners, its traffic, its graffiti, the chemistry of its crowds, its persistent heat. Neysa takes us to the intersection of Ocean Avenue and Parkside, at the extreme southwestern corner of Prospect Park, and then plunges deeper into the neighborhood from there. Neysa, Cuppa, and Rells are charismatic tour guides, and they seem as much a part of the Brooklyn environment as the residential towers and wrought-iron gates. Neysa frequently denaturalizes the footage by saturating it with bright, flashing primary colors. When she does, it takes on the character of street art: high contrast, high intensity, a private language written for the initiated, but alluring enough to solicit interest from curious outsiders.