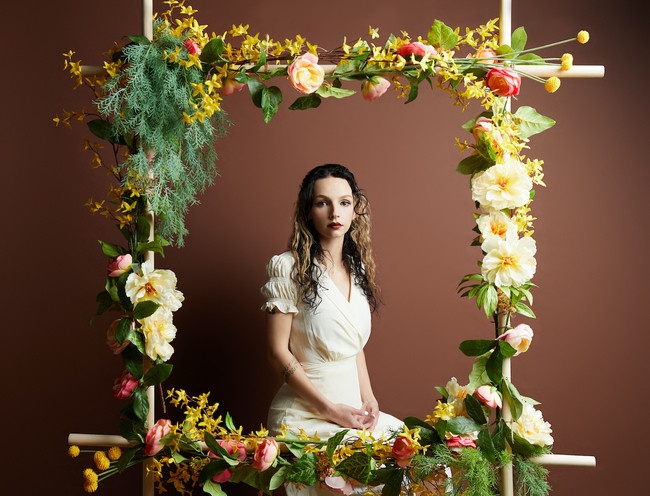 “Ghost” from indie pop meets French folk artist Gal Musette. The Orange County musical prodigy creates dreamy melody-driven compositions and has collaborated with the likes of Rufus Wainwright as well as toured with The Magnetic Fields and Donavon Frankenreiter among others. “Ghost” is off of her forthcoming full-length Backwards Lullaby featuring bittersweet lush songs all about heartbreak.

Gal Musette is the nom de plum of Grace Freeman, a musical prodigy who began writing piano based lyrical compositions and performing at open mics in her home city of San Clemente, CA at the age of 10. Her graceful approach to melody-driven indie-folk and French chansons has captured audiences all over Southern California. At age 14, inspired by The Magnetic Fields’ triple album 69 Love Songs, Gal recorded her own collection titled 70 Love Songs, which caught the attention of the band, and won her an opening slot on a few of their Midwestern U.S. tour dates. In more recent years, Gal has opened for several renowned artists such as Macy Gray, Suzanne Vega, Todd Snyder, and Donavon Frankenreiter. While her artist name is taken from bal-musette, the accordion-based, waltz-style French instrumental music, Gal’s primary inspiration is drawn from songwriters including Joni Mitchell, Regina Spektor, Bjork, Cocteau Twins, Burt Bacharach, Irving Berlin and The Cure.

In October 2021, Gal will be releasing her debut album, Backwards Lullaby, featuring a vocal duet with one of her biggest musical inspirations, Rufus Wainwright. The upcoming album explores the pangs of hopeless romances and unrequited love, what it’s like to move beyond idealized love into the acceptance of what is real and constant, as well as the cyclical nature of life and love in relationships.

“Summertime,” the first single from the EP, was released in June and tells an overwhelmingly nostalgic and bittersweet narrative about short-lived friendships, like romances, that fade with the season’s change. The romantic and warm nature of the song overflows with a joyous indie-folk melody laced with snippets of loss and heartache.