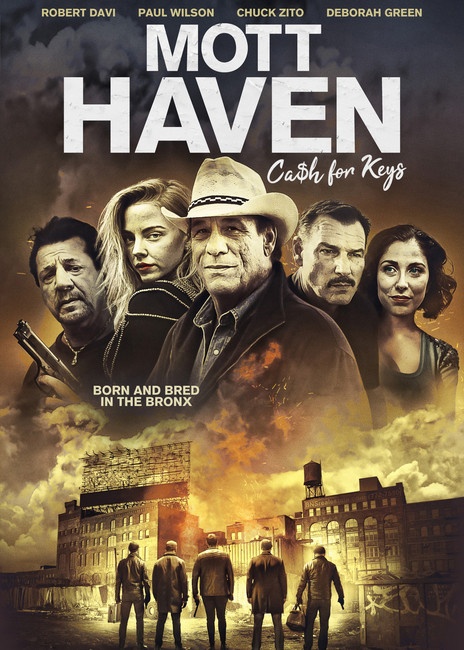 Writer/Director Michael Domino officially launched his Domino Pictures with the release of Mott Haven-Cash For Keys; based on his book (written with Robert Mladinich) toplining Robert Davi and Paul Wilson, earlier this month.

The movie Mott Haven not only focuses on saving the South Bronx inhabitants in the film, but it also brings an important light to the need to save the environment. Bringing the two causes together adds power to a movie that has become a much talked about title at the festivals where is has screened.

Davi, delivers a complex, compelling performance as a former mogul, radioman Hal. The character of Roman -essayed by Wilson- is based on the co-writer, producer and director of the movie, Michael Domino.

Adds Davi: “I wanted to do a film that addressed pressing issues of the day. For me Mott Haven captures in some way the essence of this genre, it is an honest film that provides an alternative to the sound and fury of a lot of contemporary film-making which I enjoy while eating popcorn, but does not provide philosophical discussion. These two souls eventually meet on a park bench in Mott Haven, in the South Bronx and effect not only each other but the others in the community.”

Domino describes the movie in one simple sentence: “At its core, it is a redemption story.”

Domino, who has worked in the recycling business for more than 30-years, wrote the movie with Robert Mladinich (as did the pair on an earlier movie entitled The Expediters) and was inspired by a chance meeting that he had with a former radio giant who, after a life living on Park Avenue, ended up living on a park bench. From the bench, the former mogul found a single room apartment in the South Bronx neighborhood of Mott Haven – the basis for the fictional story of Hal and Mike’s fight to stop gentrification.

Domino, who is also shopping a new novel called Camp Hero ,has been a significant figure on the sidelines for years; writing several novels; plays and even a book on his photography: Officially launching his banner Domino Pictures, Domino says, “I want to tell great stories with great messages.”