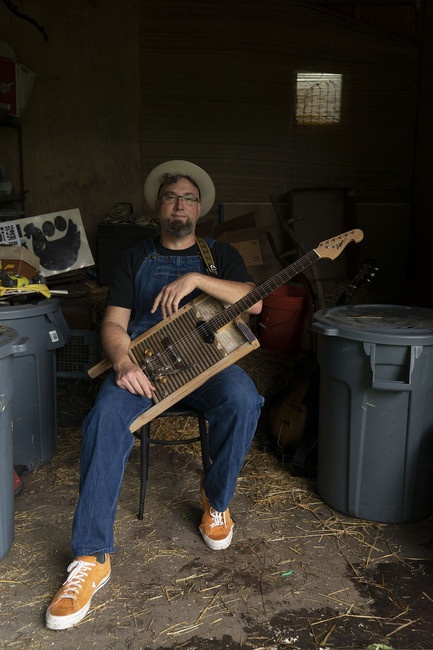 “The world that you grew up in is no more.” Let those words sink in for a minute. It’s a statement of truth, but it’s also a statement open to interpretation. For a fair number of the population, it’s a positive thing. We live in a healthier, safer, and more equitable world than before with an eye towards the future. But for the rest? Well, not so much…

From his urban farm in unincorporated Gary, IN, Dennis J. Leise sees the world differently. Growing up in rural Pennsylvania (outside Pittsburgh) and a long stretch in Chicago, he’s lived in several worlds. Maybe Gary isn’t most people’s vision of a personal nirvana, but for Dennis, it allowed him both accessibility to the music scene he’s entrenched himself in as well as the solitude of working the land.

A recent feature article in the Chicago Reader titled “Dennis J. Leise grows his own” highlights his successful, if unconventional, balancing act of having his cake and eating, too.

As the lead track off of his new album, The World You Grew Up In Is No More, “Hurry Up and Die” strikes at the heart of those that would rather just sit back and complain about the world passing them by than adapt to change. The opening riff of the single-coil guitar lead makes this track sound as if it were ripped from an early Johnny Cash catalog, with a beefy baritone vocal delivery to match. While the Man In Black may deliver his message with furrowed eyebrow and snarl, Leise implores the old guard to step aside with a defter touch.

If his previous video for “Nobody’s Comin'” didn’t make the point that he’s unafraid to ruffle feathers, with Dennis dressed as a priest espousing the virtues of atheism, then “Hurry Up and Die” is the frontal assault on nuance. He once again teamed up with director Rob Fitzgerald to capture a delightful oddity of a visual. The black and white video has him in the back of his farm truck singing to the camera as the angel of death lurks around the property sulking about everything new. The farm residents take exception to this disrespect and, in the end, have a word with the cloaked figure. But not before he joins in with Dennis for a bit of fun. Can you say Grim Reaper Jazz Hands?