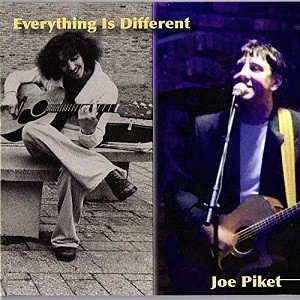 It takes considerable daring to include an outright progressive track near ten minutes in length, a doo wop song colliding with some classical, and a heartland rocker on a single album. Joe Piket doesn’t care. He goes a step further with the eight track release entitled Everything is Different. The album opener “Now I Have Everything” is a bold way of introducing his solo release. The meshing of classical in its intro before it shifts into doo wop. Piket’s versatility as a vocalist is one of the abiding strengths of this release.

He doesn’t have a classically beautiful or trained voice but, as I have read about other singers, it has lots of character. His talents for phrasing and inhabiting a “character” comes across beautifully during the track “Coke Stevenson”. Guitar isn’t one of the album’s dominant instruments in a traditional sense, you will be hard pressed to find much in the way of guitar heroics during this release, but the second song comes closest.

It recalls, in spirit, the work of singer/songwriters such as John Mellancamp, Tom Petty, et al, without leaning too heavily on the genre’s tropes. Invoking the name of a long forgotten Texas governor, in my opinion, is about as American as it gets. It follows a narrative closer than any other track on Everything is Different and, as such, gives listeners another angle on Piket’s songwriting talents.

“My Breath to You” is one of my favorite moments on the album. The lyrics for the first verse are flawless, each line flowing into the next, and the remainder of the cut maintains the same high standard. It has jazzy inclinations reminiscent of Steely Dan, but less self-conscious. The juxtaposition of Piket’s dark yet eloquent lyrics with such an inviting musical arrangement makes the song stand out more.

Rollicking piano linking with a vibrant horn section is enough for me to love “Hard to Be Good”. Piket’s powerhouse singing for this song, however, and the punchy chorus enhance its existing appeal. The finale “Another Age” is almost ten minutes long but never overstays its welcome. It isn’t Piket’s first nod to progressive rock ambitions, the earlier “Piles” has a similar yet scaled back sound, but adds an emphatic exclamation point to this release that should leave a few jaws agape. There seems to be little he cannot do.

Everything is Different has eight songs but pays off like a double album without any discernible dips in quality. When you break with a longtime band and take the plunge into a solo career, it behooves you to meet the moment with the best creations you can bring to meet that moment. Joe Piket shows up to impress with this collection and I believe its long reach is more than justified. Nothing seems beyond this guy. Long Island’s Joe Piket is an audacious songwriter, without question, and his release Everything is Different goes in a handful of directions few other performers or songwriters dare to travel. It’s well worth taking the trip with him.