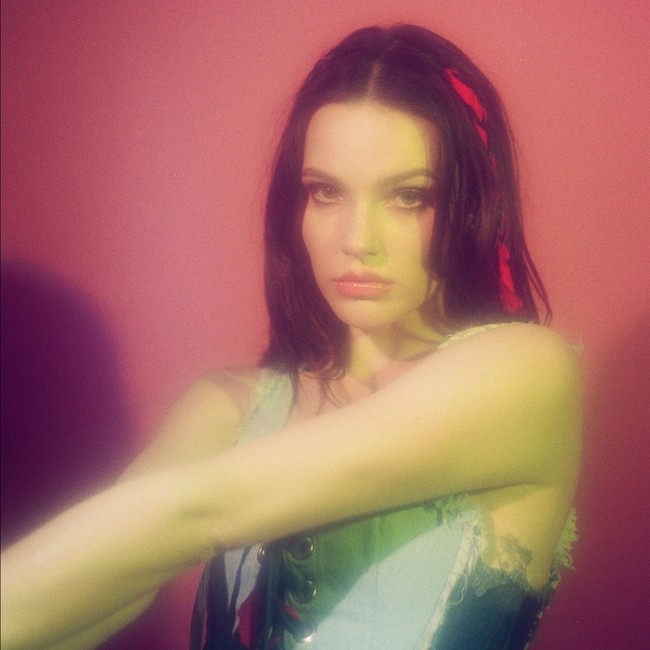 Ginesse, the project of LA-based actress Cait Fairbanks, shares the official music video for her new single “Gatorade.” The single, which was released on June 4th, was her first release since her 2020 breakout EP, ‘Somewhere To Die.’

“Gatorade” is an otherworldly, glitch-pop number inspired by the astrological phenomenon of mercury retrograde (hence the tongue-in-cheek song title). Directed by Christina Bryson, the pairing music video opens with a choose-your-own-adventure main menu (designed by Brooke Bevers) before exploding into a video game inspired wonderland. Bryson notes that the video pays tribute to music videos like David Bowie’s “Life on Mars?” And Kate Bush’s “Wuthering Heights,” while still staying true to Ginesse’s aesthetic with fun, nostalgic styling (courtesy of Jordan Douglas) and trippy visual effects. “The overall theme was just for it to be fun,” Ginesse says. “I wanted everyone to feel like they’re joining a video game.”

Ginesse is the musical project of Los Angeles-based actress Cait Fairbanks. In 2018, having already made a splash in the acting realm with her Emmy-nominated role on The Young and the Restless and multiple TV guest spots, Cait unveiled her musical endeavors under the moniker “Ginesse” — a name inspired by a local street and her preferred choice of liquor. With a signature sound that is not wholly mainstream but still irresistibly catchy, her singles quickly picked up support from the likes of PAPER, NYLON and Billboard, setting the stage nicely for the release of her 2020 debut EP ‘Somewhere To Die.’