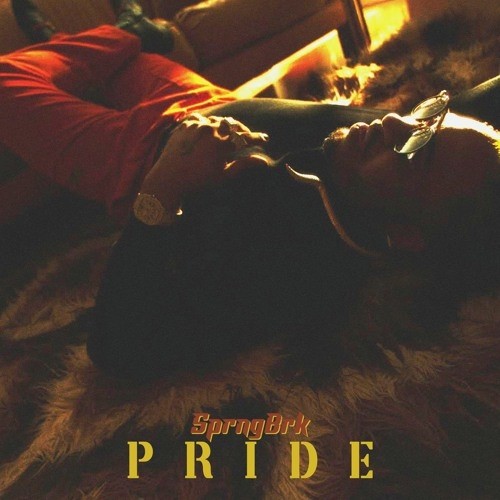 Pride, as singer and rapper SprngBrk would surely tell you, makes people do questionable things. It prompts lovers to part or cheat out of spite, just to soothe wounded egos. It causes people to hide the truth or risk looking foolish in front of their peers. It can make a good man betray his friends and make a woman turn her back on everything that gives her comfort and solace. It is, in short, a pumping, churning engine of drama — which makes it an ideal subject for an R&B song.

Dramatic storytelling comes easy to SprngBrk. He’s got the right voice for it: his performances are effortlessly emotive, but they contain reserves of mystery and intrigue, too. No matter what he’s singing, he always sounds like he’s revealing a secret. Maybe it’s one of his — or maybe it’s one of yours. No matter how much he treats his vocal signal or how otherworldly the effect, the essential human scale of his narratives is always apparent. Humor, anger, longing, nostalgia, seduction: it’s all present in every song he performs. “Pride” is just about the best of them (although he’s had many great ones, dating back to the days when he performed as A1 Bentley). It’s a smooth, gleaming, scintillating exercise in confessional songwriting, and no matter how sweet it sometimes sounds, it’s got a sting.

SprngBrk’s flexibility has made him a man in demand. His upcoming project will feature Jeremih, Mario, Future, and many others. He’s recorded with T-Pain, written for Trey Songz and Ty Dolla $ign, and made his presence felt on the screen through his appearances on Love And Hip-Hop. As everybody who has watched the show knows, he’s a natural on camera — one who fills every frame he’s in with charisma and charm — and he puts those skills to work in the stylish “Pride” clip, which he directed himself alongside Sean Alexander.

The video begins right in the middle of a heated exchange between SprngBrk and his girlfriend. They’re both furious and uncompromising, and it’s pretty clear that pride is guiding their actions. She packs her bag and leaves SprngBrk behind, but not without private regret. In keeping with the vintage sound of the song, everything in SprngBrk’s home is rich with mid-’70s chic, including the clothes the principal actors wear, the furniture in their living room, even the plates that they twirl their spaghetti on. It’s a warm and comfortable domestic space – and a hard one to leave, even after a terrible fight. And as the characters learn, once you’ve decided to go, it’s not always easy to come back.