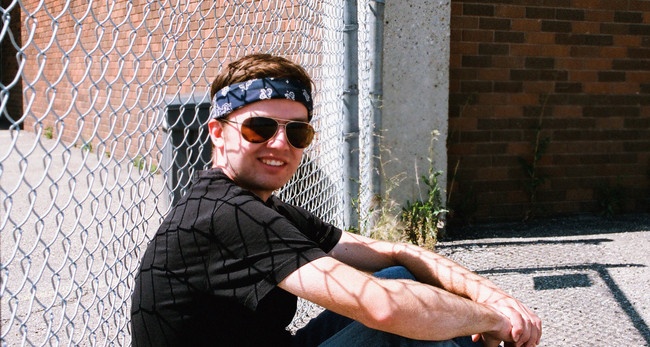 Here we are again on this Friday morning and we are so excited to have Jackson Reed here with us today. Jackson Reed has been busy lately with his new single ‘The Walk.’ The song inspired a dance which went viral on social media when influenced Gracie Jade did the dance on her TikTok page. Join us today as we discuss that and so much more!

It seems like there’s a long distance between a Bruce Springsteen-influenced singer/songwriter, and influencer Gracie Jade. How did she end up connecting with your music?

JR: I was the one who approached her actually. With the new song, I wanted to try and do some promotion through TikTok as a way to reach a new audience. She and her agency were interested right from the start and we were able to put something together that has had a lot of eyes on it. The video of her dancing to the song got 400,000 views on my TikTok profile.

For those that may be unfamiliar with Gracie Jade, why is her connection so important?

JR: Gracie is from my hometown of Calgary, Alberta. She has about 450,000 followers on TikTok right now, and is a part of a Canadian agency called OneFluent which has a roster of similarly successful influencers.

How important is TikTok to marking music these days? How does it help?

JR: Well it helps for the fact that music is an important part of the content on the app, and that there are a ton of users so it can get you in front of a lot of people. That’s the good thing about it. However, I feel like it’s still possible to be a successful musician without using it. I was surprised to see there’s a lot of big name artists who didn’t have much or any songs available to use on the app. I still think it’s worth having your music on it though, because the right video can make a song popular.

Your song, “The Walk,” inspired a new dance, right? Do you like to dance, and are you good at it?

JR: It’s a good dance that Gracie did, but I can’t do it, I’m not much of a dancer ha ha. The best dancing I could pull off would probably be something between Bruce Springsteen in the Dancing in the Dark video and what Mick Jagger does on stage every night. I can move along with the music, but if it’s a choreographed thing I have to do – I’m in trouble.

Why was it important to you to have your video set in cold weather?

JR: Well to tell you the truth, it was in cold weather because it was February in Calgary and we wanted to get it filmed so that we would be ready for a spring release. Although, I’ll say that I think it shows how you always have to be walking and moving forward even when it might not seem like the best time to do so.

Were the lyrics to this song inspired by watching a particular girl walk? If so, is there a story behind this inspiration?

JR: The lyrics weren’t really inspired by anyone. I actually came up with the chorus for the song in about Summer of 2018 (do the walk, do the talk, do the walk, do the talk, don’t ever stop talking to me). As I do with all of my ideas, I recorded myself singing that melody and then put it away for later. Then late in 2020, I remembered the idea and thought it would be a great number to have a dance with and to use that aspect as a promotional element. So, I wrote the rest of the song and recorded it over a weekend last December.

Who is the woman in your video, and why did you choose her?

JR: Her name is Meggie Wills, and she is also a local TikToker/model here in Calgary. She’s in the same crowd as Gracie, and when Gracie couldn’t be in the music video due to scheduling, I came across Meggie and asked her if she would be interested. She said yes right away and did a great job.

Did you modify the way you walk for the video, or is that your natural way of walking?

JR: There was definitely some modification for quite a bit of it, like during the breakdown part in the song, or when I’m playing my guitar and grooving along. But for the most part I was just walking the way I always do.

What musical influences inspired the sound of “The Walk?”

JR: I would say Prince was the biggest one. At the time I decided to put the song together and go record it, the record I was listening to the most was Sign o’ the Times, which of course has the song U Got The Look. That number had that kind of funky, dance-rock feeling that I wanted my song to have. I think Prince was one of the best at combining great musicianship, guitar playing, and all that good rock and roll stuff, with super radio-friendly pop elements. Though I don’t think I’ll ever dress like him or anything like that, I want to be able to do a lot of the things he did musically.

JR: I think any genre of music can make you dance, it’s all about how you write and arrange the song. There’s been plenty of songs that have come out over the years that are guitar-oriented and make you want to dance. You just gotta put the pieces together in the right way for the desired effect.

Where can music fans find you online?

My YouTube channel where you can see the music video for The Walk is here (https://www.youtube.com/channel/UCFPJ0S6MqbPPZ_e2MkpjaCg).

To stream the song, head to my Spotify (https://open.spotify.com/artist/7ESel8t5FeFS3HFneUfUoh).