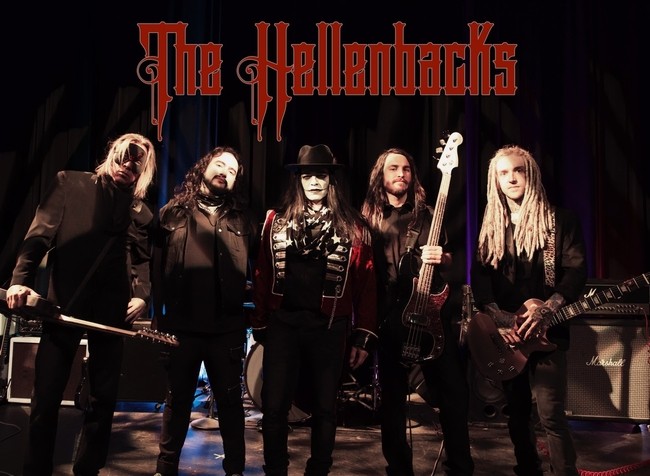 Blazing full steam ahead since the successful release of their hit single and video “Pleasant Doom”, acclaimed Frontman Jimmie Romero and his all-star band The HellenBacks have revealed details for their much-anticipated new album III.

The record, which is the third to be added to the acclaimed hard rockers’ arsenal, is available now on all DSPs. Produced, mixed, and mastered by Romero at his recording studio Stay Vintage Studios in Las Vegas, NV, the 14-track collection is a concept record that is meticulously-crafted to tell a larger story, as each song builds upon the next.

“With this album, we really wanted to do something different; stretch ourselves creatively and musically,” said Romero. “The concept record format allowed us to tell a much larger story. One that let us explore deeper and more progressive issues like mental trauma, recovery, personal growth, morality and true beauty.”

Tracks like the album’s debut single “Pleasant Doom,” which Romero says “depicts the record perfectly by exploring the initial attraction to toxicity masquerading as beauty and the personal growth and recovery necessary to ultimately say goodbye to something, or someone, that would ultimately lead you to your doom,” “Death Kiss,” and “Evil Like You” showcase the band’s songwriting dexterity and musical proficiency.

However, III’s mature and sophisticated sound truly stems from the caliber of musicians who performed on it. In addition to The HellenBacks lineup, which includes Guitarist Michael “Doc” Ellis (Formerly of Love Hate and Ratt), and Drummer Al Serrato (Formerly of Jet Boy), special guests Guitarist Todd Kerns (Slash Featuring Myles Kennedy and The Conspirators), Bassist Sam Harman (Void Vator), Bassist Barry Barns (Count 77), and Guitarist Dylan Dice were also called in to round out the album.

“It was an honor to work with this level of musicianship throughout the entire recording process,” said Romero, who produced, mixed, and mastered the album at his recording studio Stay Vintage Studios in Las Vegas, NV. “Not only did the musicians offer a variety of different sounds and experiences to the project but they each lent a unique perspective that was invaluable to the overall outcome of the record.”

The official tracklisting for III is below:

The HellenBacks have released two albums to date. Their debut album Vampires Of The Desert was released in 2017 and received critical acclaim with Vintage Guitar writing “The Skillful guitar machinations of Ellis and Romero provide a powerful blend of rootsy virtuosity and feel throughout. The HellenBacks’ music is familiar without being derivative, and will find longtime residence on your playlist.” Oscar Jordan – Vintage Guitar