Dick Aven’s It All Started In The Garden is an unusual album, and one difficult to easily describe. Aven sings with a slightly jazzy voice and the album includes some jazz-related instruments, but one wouldn’t call this full-length release jazz music. Perhaps the best descriptor would be sophisticated pop. 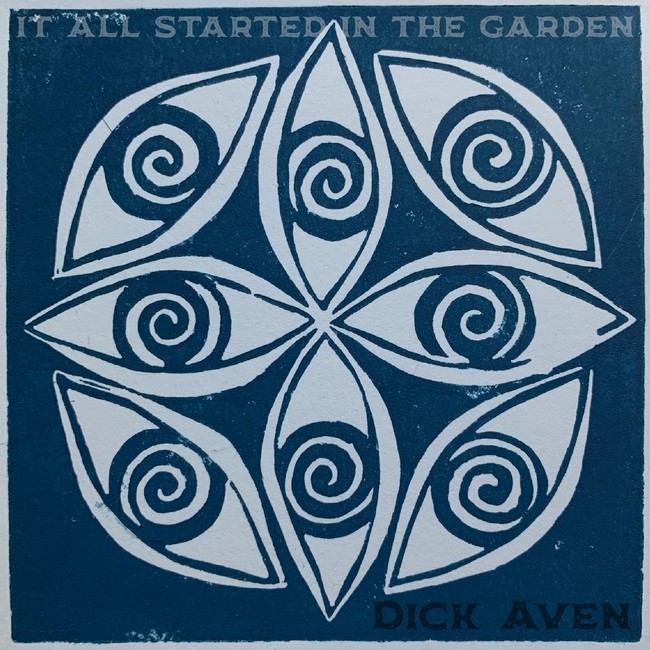 The album’s title suggests something spiritual. However, this is not an especially spiritual album, even though Aven drops religious phrases here and there throughout. Many of these songs seem to speak about a relationship gone bad. Perhaps this is why Aven called it It All Started in The Garden. This Biblical passage, after all, featured the first known marriage trouble between Adam and Eve.

Quite frankly, some of these songs (and song titles) are unusual. One called “Old Black Mold,” for example, is a nice, acoustic guitar and saxophone accompanied song. However, it is also a rather sinister sounding lyric. “Glorious Flashes” is filled with flashbacks to when a love was good. It’s not good now, though. This one is also driven by acoustic guitar. Aven sings its bridge, “Now, it’s over,” in a scratchy, strained voice. It’s as though dredging up these happy memories is only bringing him down.

“Perpetual Weekend” is the album’s jazziest tracks. It opens with a saxophone part that sounds a bit like a 70s TV show theme song. This sax instrumentation is mixed with electric piano and vocals that are somewhat like a Gregorian chant. A title like “Perpetual Weekend” should be matched to happy music. After all, after a long week, what could be better than a perpetual weekend? However, this is not happy music. It’s somewhat sad, instead.

The album features plenty of acoustic guitar. Opener, “This Is How I Am” is one that includes plenty of acoustic guitar. It’s vocal intro, though, sounds like something The Shins might do. Usually, when someone states, “This is how I am,” it’s more often than not filled with negative character quality revelations. Someone with top tier personality traits, doesn’t need to tout them. Partners already know what’s best about their mates. When someone tells you how they are, it’s primarily to apologize for their flaws, in most cases.

One called “Island Of My Own” opens with a screaming sax solo. It sounds like the beginnings of a blues song. Once Aven begins singing it, though, it’s clear this is a ‘leaving a lover’ song. Psychologically, this man sounds like he’s isolating himself. This track also includes a quivery whistling solo. It’s likely the saddest whistling solo ever on a recorded song. This is NOT one you might care to whistle while you work.

It’s early needless to say, Dick Aven is a complicated man, and his music reflects his complicated personality. He hints at his feelings, rather than coming right out and saying specifically what is on his mind. Sonically, this album has traces of what’s been termed ‘yacht rock.’ This is how a lot of breezy 70s music is now described. With that said, though, Dick Aven’s songs are anything but breezy. Instead, they’re slices of a sad life in a post-breakup phase. It’s good, too, even though it probably won’t make you feel especially good.