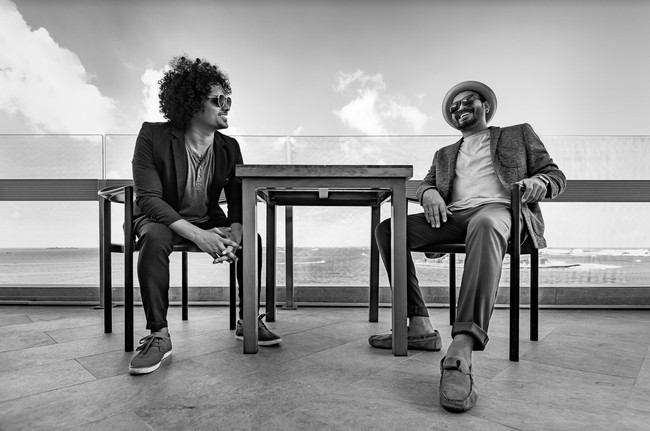 If you were alive in 2020 and you had ears, you know “Blinding Lights.” It was more than just a chart-topper; it was the soundtrack to a summer like no other, a certified party starter at a time when we weren’t encouraged to celebrate or even congregate, a breeze of liberation at a time of confinement. The Weeknd’s winner seemed to exist at the intersection of all of the genres and trends of 2020: new wave-inspired synthpop, electro-funk, hip-hop, Caribbean music, dark club music, and everything else that got us moving. Years from now, you’ll hear that melody, that indelible riff, and you’ll be brought back, just as surely as if you’d stepped into a time machine. And it won’t matter if you’re spinning the original or one of the many creative covers that “Blinding Lights” inspired.

And perhaps the most creative one you’ll ever hear is this one: a pure beachside instrumental reinterpretation of the pop smash. Together with saxophonist Husen, Faizan, master of the handpan, reconnects the “Blinding Lights” melody to its tropical roots. Faizan’s interpretation of the After Hours track retains its sophistication, drama, and epic, cinematic sweep while bathing it in bright, equatorial sunshine. But as relaxing as it is, Faizan’s “Blinding Lights” still manages to capture the tone and the knife-edge excitement of the original – even without a vocal!

That’s part of the magic of Faizan’s music, and it’s a testament to the singularity of his approach. He’s a tropical percussionist with a tone powerful enough to stand up to a full band and a progressive rocker (he’s the founder of Skyrock band) who’s never discarded a single good idea.

Husen, the featured artist on this single is also one of the members of Skyrock Band. Well-known among Maldivian musicians he is a music producer, composer, and a multi-instrumentalist, mastering the flute, saxophone, and keys.

Faizan and Husen are two of the best-known musical exports from one of the most beautiful places on the globe: the Maldives, the magnificent chain of atolls in the middle of the Indian Ocean. The Maldives have been buffeted by the twin storms of climate change and the global pandemic, but Faizan and Husen are still standing tall, undaunted, making visionary music from the heart of a troubled paradise.

Faizan’s videos always immerse the viewer in tropical sunshine, and the “Blinding Lights” clip is no exception. The video was shot in Ozen Reserve Bolifushi, one exceptionally beautiful resort in the Maldives. The percussionist and saxophonist perform on the patio of a gorgeous seaside house – one with a crystalline swimming pool, a handsome gazebo, solar panels on the roof, and two vintage automobiles in the driveway. Directors Vishal Zaki and Vishal Amir capture the musicians in action on a pier overlooking the water as boats drift by the background of the shot. Faizan’s instrument is a focus of the video, too: the handpan is something like a steel drum and something like an unidentified flying object that has landed in the percussionist’s hands. As he plays, his concentration is total – but his flashes of joy and pride are impossible to miss.