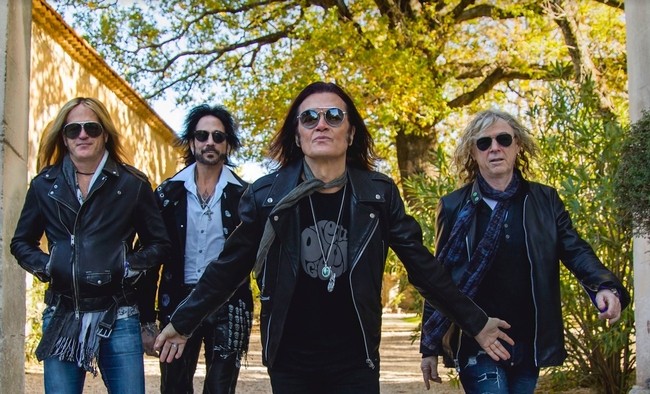 Every great rock band keeps an eye on the sky. Rockets, starships, blast offs, views from orbit: for rock musicians, these are more than just metaphors. They’re secret wishes and wild hopes for barrier-breaking adventures. Few of us will ever have the experience of riding a spacecraft beyond the ozone layer, but we bet it’s not unlike the experience of plugging into an amplifier and launching into a great rock song – a song like “Chosen And Justified,” the latest single from The Dead Daisies. The lyric video for “Chosen And Justified” takes us to the rim of space and back, and it does it (mostly) through the power of words.

“Chosen And Justified” is no standard lyric video. Expect effects, eye candy, rocket blasts, and pictures reminiscent of classic science fiction movies and their posters. Song lyrics in the heavens, right alongside the stars, and verses and stanzas accompany rockets as they race across the frames. Everything about the video achieves escape velocity: the high-contrast shots of missiles in flight, the spectacular computer-generated images of an imperiled Earth, the hyperspace effects, the blinking space stations and vapor trails, the constantly shifting perspectives and the rapid pace of the cuts, and the lightning flash of the letters as they’re seared into the black sky. Chosen And Justified turns out to be the name of the mothership – a star-cruiser scouring the galaxy for a suitable new home for beleaguered humanity.

There’s more than a hint of discontent with contemporary society in the “Chosen And Justified” lyric: a sense that we’re all in trouble and heading into the unknown with no steady hand on the steering wheel. This isn’t the first time that The Dead Daisies have assayed our collective psychological state in song – they’re carrying on a long tradition of confrontational hard rock that isn’t afraid to question authority. But mostly, these guys want to rock, and the propulsive sound of the mix is a perfect match for a lyric clip determined to blast off to lands unknown. Guitarist Doug Aldrich, who has also played with Whitesnake and Dio, contributes the skyscraping leads while rhythm player David Lowy of Red Phoenix and Mink holds it down at mission control. Drummer Deen Castronovo of Journey, Bad English, and Hardline provides the jet fuel. As for singer and bassist Glenn Hughes of Deep Purple, he’s spent decades shepherding listeners through the stratosphere. He’s a practiced hand at interstellar travel – one who always knows the way to the stars.