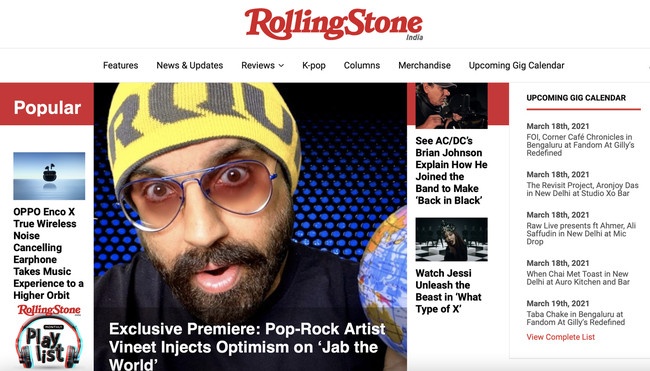 Indian singer and songwriter Vineet’s latest single “Jab the World” is topical, but Vineet has uncovered a way to keep the track from sounding dated. Rather than confining his subject matter to the pandemic alone, he widened his songwriting lens and uses the COVID-19 global emergency as a jumping off point of sorts towards a larger and more timeless theme. “Jab the World” imagines a day when science discovers a vaccine capable of ridding humanity of unreasonable hatreds and prejudices. It may seem Polyanna-esque, a pie in the sky fantasy, but some could and would say the same about Lennon’s “Imagine”. The final barometer of its success is how well Vineet lyrically, vocally, and musically invokes his vision of a better world for us all.

The track is lyrically straight-forward and eschews any hint of self-indulgence. Vineet doesn’t weigh down the purity of his message with pseudo-poetic flourishes and the accessible conversational style works without fail. Vineet’s decision to convey his thoughts and feelings in such unadorned language neatly dovetails into the equally universal appeal his musical arrangement exerts over listeners. “Jab the World” provides a complete listening experience on every level and it is obvious Vineet labored mightily to craft a track with near universal appeal. Who among us doesn’t regret the sheer amount of vitriol and willful misunderstanding infecting the world at large?

The effects applied to the song’s guitar sound present a take it or leave it proposition. Many will find that, despite its manipulated sound, the guitar work remains true to the spirit of rock music. The muscular riffing, the occasional glimpses of flash burning through the composition, and the decisive bite of the playing will capture the attention of many. The remaining components of the arrangement, in particular the rhythm section playing, ensure the track has well-rounded support that never draws too much attention to itself.

Vineet further strengthens the track’s presentation with a music video underlining the hopeful tone of “Jab the World”. It syncs up well with the spirit of the track, reflected in Vineet’s initial tribute to the sacrifices made by front line medical professionals, and the accompanying visuals flash by listeners yet still make a significant impact. It is filmed with great professionalism and polish and the wide array of people appearing in the video are clearly enjoying their participation in this clip.

The center of the track, however, is Vineet’s vocal. His singing has equal parts passion and gravitas; you can’t help but listen until the cut concludes. It is difficult, if not impossible, for anyone to hear this vocal and believe Vineet received post-production assistance in any meaningful degree or that he couldn’t match or outstrip this studio performance during live shows. He is the crowning touch on “Jab the World” and his full-throated commitment to the song is palpable from the first line to last. He orchestrates its dynamics with a steady hand without ever risking any easily pigeon-holed approach to making the number work for the widest possible audience.