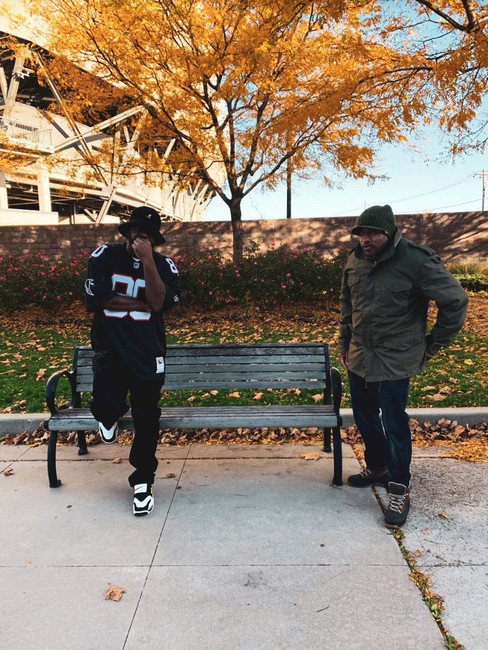 Newark is a city like no other. And yes: everybody says that about the towns where they’re from, but anybody who has spent any time in Newark will know exactly what we mean. The light, architecture, history, people, and crazy rhythms – all of the life elements in Newark are singular, characteristic, and passionately appreciated by those who claim a Brick City address. The streets of Newark, as everybody knows, can be rough. But it’s also one of the most spiritual places in America, a town of countless steeples and congregations, and the devotional music in Northern New Jersey remains second to none. Spirituality bathes cultural production in Newark in radiant color, like light filtered through stained glass.

Consider The Org. They’re Newark rappers, and in the long tradition of Jersey MCs, the words they write are tough, unsparing, brutally realistic, and fiercely intelligent. When they tell street stories, it’s crystal clear they’re speaking from hard experience. Yet, they make their love of God apparent in every verse they write. MCs and producers B-Down and 360 speak about parallel struggles – the daily fight for dignity and basic subsistence and the longing for spiritual rebirth and the blessings of eternity. The pair do it so ferociously and with such unswerving commitment that they show their audience something that everybody in Newark already knows: it’s all part of the same battle for survival. On “Peace,” they work Bible verses and prayers into their rhymes, shout out the Book of Philippians, and worry about the state of their immortal souls. At the same time, the metaphors they use are pulled directly from the lexicon of hardcore rap, and their flows are tough, sinewy, and uncompromising. Rarely does religious music go so hard. Rarely do hip-hop verses sparkle with such radiant spirituality.

B-Down and 360 begin the video in the Springfield-Belmont neighborhood, in the heart of Newark and the geographical center of the biggest city in New Jersey. But for the “Peace” clip, they’re taking us to the places where Newark shakes hands with the rest of the New York metro. The clip opens in Newark’s Penn Station – a symbol of the town’s rebirth and the train’s centrality to local culture – where B-Down, sleeping rough, is roused from his rest by a police officer. He soon crosses the Passaic River to join 360 and rhyme in front of another landmark: the Red Bull soccer stadium. This is the backdrop to The Org’s dramatic storytelling, the town they know best, the still-beating heart of the Garden State, and the place on earth where heaven meets the streets.