On their new single, Conceptz ask a select community of individuals to “Hold This L.” L is of course short for loss, and Conceptz offers the letter to their haters, to display for all to see. Two brothers out of New York, comprise the group known as Conceptz. Hydrophawnix and Short Fuze, established Conceptz in 2012, with the same intentions as most musical acts; to take over the world. Considering their impressive collection of accolades, thus far, world domination may not be out of their reach. 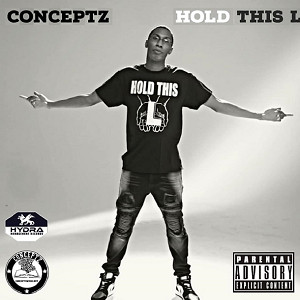 Prior to their current release, Conceptz has had their Music featured on MTV, as well as having their music used by the NFL, the NBA, and MLB. They cite their best show, thus far, as their first one; the BET Awards After Party. You can’t exactly call Conceptz a Cinderella story, but they do seem rather charmed. In no way can you discount the group’s creativity, which is more than apparent on their new single. In fact, the brother duo shows a penchant for subtle infusions and complex vocal layering that grabs you from the start.

“Hold This L” sounds like a mixture of an incredibly competent freestyle and a meticulously designed Hip Hop masterpiece. Hydrophawnix has an energy to his style that when coupled with his exceptional sense of linguistics, makes for a virtually head spinning experience. “Hold This L,” comes at you like a fight scene from a Jackie Chan movie, as it assaults you from every possible direction. The track is bursting with modern societal references, that give it a sense of immediacy. The manic delivery of “Hold This L,” captures the bewilderment of our current climate.

Musically speaking, “Hold This L” is as low maintenance as it gets. In fact, the beat is actually slightly lower in the mix, as to further accentuate, Hydrophawnix, which is exactly what they should have done. There’s just enough gimmick to enhance the aura of the piece, in its entirety. Conceptz goes out of their way not to over produce “Hold This L,” and instead, give the track ample space to breathe. It’s a sparse, but intentional record, that leaves an impression.

Letter before M/yes I ignore them/Only W’s on this side/you wouldn’t get it/hold this L/suck it in your spirit/yes I deplore them. You simply have to hear the verbal dexterity that Hydrophawnix displays here, because even the most descriptive recount, can’t do it justice. He is on another level as an emcee. You will probably scroll back, several times, simply just to decipher and grasp the full extent of his diatribe. It’s not so much the speed that Conceptz employs, but the jocularity which accommodates that pacing.

As intense as it is, “Hold This L” is still a somewhat low key track. It won’t demand or beg for your attention, but it will get it. I had it stuck in my head, from the first listen, and it hasn’t left, since. “Hold This L” is brash and self-congratulatory, but it’s not trite, or cliché. Conceptz is conceptualizing the potential of Hip Hop.