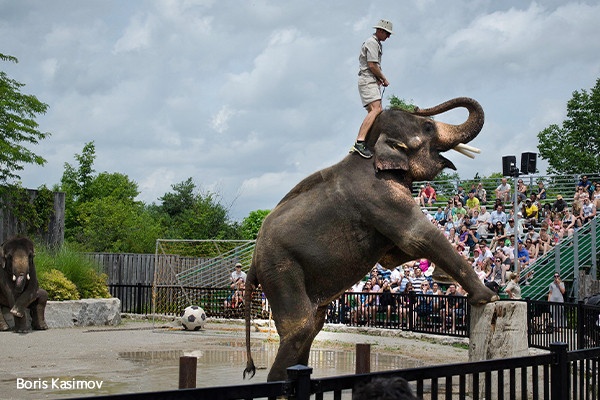 Captive elephants are being failed by zoos and their suffering has been exposed today by In Defense of Animals on its respected annual list of the 10 Worst Zoos for Elephants in North America. The 2020 list reveals how zoo practices are harming and killing elephants.

African Lion Safari in Ontario, Canada, is ranked as the #1 Worst Zoo for acting as an elephant trafficking hub. The facility breeds elephants for sale, causes “transfer abuse” trauma through repeated shipments, dominates elephants with bullhooks, forces them to perform unnatural circus tricks, and endangers children and adults by encouraging them to ride elephants for profit.

“Elephant health depends on strong relationships with other elephants, but zoos are knowingly tearing apart those bonds by engaging in trafficking and ‘transfer abuse,'” said In Defense of Animals Elephant Campaign Coordinator, Will Anderson. “Many zoos on this year’s 10 Worst Zoos for Elephants list repeatedly truck elephants between facilities for breeding to attract more paying visitors. Even young elephants are separated from their mothers by some of the zoos on our list. Transfer abuse is just one of the traumas inflicted on captive elephants in North America, as these intelligent and socially complex animals are denied control over their lives. The only remedy to the litany of elephant abuse exposed by our 10 Worst Zoos list is to phase out elephant exhibits and send the captives to accredited sanctuaries.”

Numerous zoos on 2020’s 10 Worst Zoos for Elephants list knowingly engage in “transfer abuse,” repeatedly trafficking elephants from place to place. The practice is associated with repetitive stereotypic behavior known as “zoochosis,” a major indicator of compromised welfare which is exhibited by multiple elephants in North American zoos.

Tragically, some zoos continue to hold elephants in social isolation, dominate them through pain and fear using cruel bullhooks, and keep elephants locked in barns over long, dark and cold winters. Many zoos also encourage unprotected contact which can cause injury and even death when elephants make an unexpected move. Throughout the pandemic, some zoos even continued to encourage visitors including children to come into close contact with elephants’ trunks — their noses — despite the debated risks of transmitting zoonotic diseases such as tuberculosis. It’s not known whether COVID-19 can spread between humans and elephants, but numerous captive animals including tigers, lions, snow leopards and a gorilla have been infected with the virus by humans at several zoos.

“Our 10 Worst Zoos list shows how zoos are killing elephants and risking human health,” said In Defense of Animals President, Dr. Marilyn Kroplick. “This pandemic has shown us how serious zoonotic disease can be, yet many of the zoos on our list encouraged direct contact with elephants which could potentially spread disease between animals and visitors, including young children. We call on zoos to stop endangering animals and the public by sending captive elephants to accredited sanctuaries.”

In Defense of Animals encourages people to avoid visiting any elephant attraction, and urges zoos to phase out their exhibits and send elephants to accredited sanctuaries where their needs are prioritized over profits.

Discover the full list of the 10 Worst Zoos For Elephants in North America 2020: http://www.idausa.org/2020worstzoosmr