No mythological system has made a more powerful impression on modern Americas’ minds than the one devised by Northern Europeans. Centuries after they were written, the Norse epics’ rhythms continue to send shudders through contemporary consciousness. We see the runes, remember the rituals, hear the stories, and feel the stark magic. Many folk and metal bands of Northern Germany and Scandinavia have tried to impart some of that awe, wonder, and horror to their music. Heilung has chased those ghosts into the stormiest seas, snowiest hills, and deepest forests. They’re the heirs to a tradition that, like the Midgard Serpent, still shakes the globe. 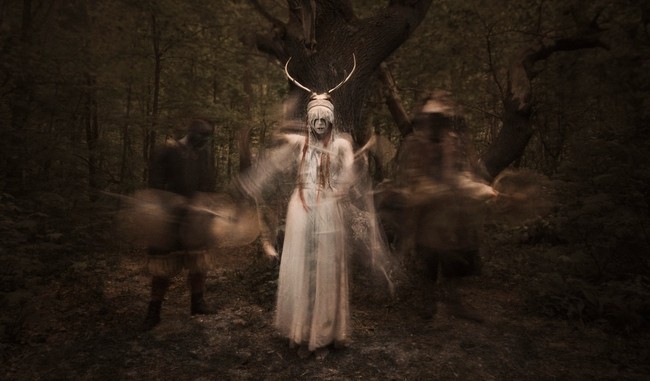 It isn’t merely that the three members of Heilung draw so deftly from traditional Nordic music, or the seamless manner in which they incorporate elements of tribal rhythms and musique concrète into their sound. It’s the group’s absolute and unsparing commitment to their heritage that has distinguished Heilung among modern folk music projects. That extends to the group’s use of Iron Age instruments, including those constructed of bone, clay, and animal skin, and the remarkable throat singing of founder Kai Uwe Faust. Their costumes are inspired by ancient inscriptions, and many of their verses were carved into runestones centuries ago.

The lyrics to the haunting “Norupo” were drawn from the Norwegian Rune Poem and originally written in Futhark, the Northern Germanic people’s alphabet. “Norupo” is written in Old Norse, a language of great beauty and power. Yet ancient as they are, singer Maria Franz teases out the contemporary implications of these ancient words. She’s singing about strength through resiliency, resourcefulness, the harshness of nature, and the balance between male and female spirits, and doing so in a manner that’s at once timeless and deeply rooted in the soil of European history. The “Norupo” video finds the members of Heilung at a site of great cultural significance – the Les Menhirs do Monteneuf circle of standing stones in verdant Brittany. Aerial footage of the site is breathtaking: the arrangements of the monoliths, the runes inscribed on the ground, and the shrouded forest combine to create an otherworldly atmosphere. Nevertheless, this is our own world and our own moment that the members of Heilung are inhabiting. Through ritual and remembering, they’re tethered to the past; through technology and talent, they’ve got plenty to say about the present.