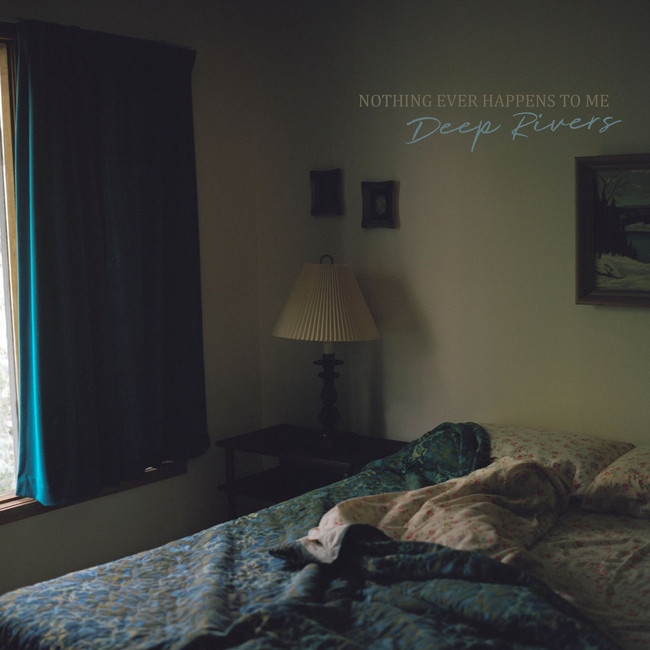 André Pelletier sings Deep Rivers’ songs with a hushed seriousness. While Deep Rivers is categorized as a folk-inspired band, the music these musicians create is more along the lines of orchestral pop. The name that keeps coming to mind again and again is Sufjan Stevens. Both Pelletier and Stevens have similarly fragile singing voices. There’s a distinct wispiness to their singing. However, such wispiness never distracts from the utterly earnestness of these songs.

In some places, Deep Rivers conjures up Radiohead, which is never a bad thing (to these ears). One titled “Keeping Up,” finds Pelletier singing in that desperate voice we’ve all come to associate with Thom Yorke. Pelletier says little more than “I’m having trouble keeping up with you,” which he repeats repeatedly, with increased intensity.

“Maybe Someday,” which closes out this album, may be the collection’s most unusual song. Pelletier sings it over sparse instrumentation. The track has a woozy melody, and what sounds like free jazz instrumental sections. These sound like a jazz trumpeter on acid, although no horns are listed on the album’s instrumentation list. Lyrically, the song sounds to be about someone giving advice to a boy aging into manhood. This transition doesn’t sound all that certain and hopeful, though.

Although ‘quiet’ is a word you’ll think of again and again while listening to this album, this doesn’t mean there isn’t also skilled musicianship displayed throughout. One titled “Grave Digger Diaries,” for instance, features a lovely electric guitar part, which spars with the string section. Lyrically, this track features Pelletier referring to the devil. While this album isn’t overtly religious, Pelletier nevertheless drops in numerous religious references. Perhaps, this is only intended as a literary device. Even so, these words may leave you wondering about Pelletier’s spirituality. If it only happened once or twice, we might not pay it any mind. It happens multiple times, though, which is intriguing.

“Goodbye” is a song that goes to waltz time signature. It mostly applies acoustic guitar to its mix, although electric guitar is also nicely utilized. With its applied string section (or synth approximation of strings), this one also has a Simon & Garfunkel vibe running through it. People don’t give Simon & Garfunkel nearly enough credit. They were so much more than merely a harmonizing duo. They also created some deeply mystical music. This song carries with it a similar S&G mystical vibe. It ends with Pelletier stating, “This is our last goodbye.”

The guitar driven “When The Money’s Gone,” is one of the album’s most plainspoken, practical songs. It discusses just what its title implies – approaching poverty.

Nothing Ever Happens To Me is one of those wonderful, onion-like albums, which reveals new layers of depth each time you listen to it. It invites you to peel off these layers, but never forces you to do so. You can enjoy it just for what it is, a beautiful selection of pretty songs. It’s really your choice, what you choose to do with it. Even if its songs raise more questions then are answered, this won’t bother you. No matter how you approach this album, you’ll come away satisfied.