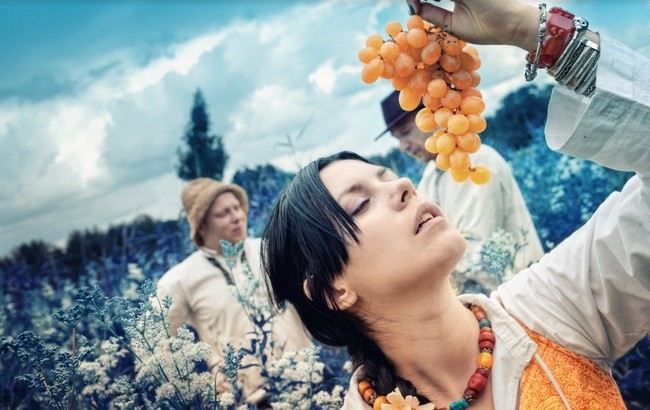 Human beings have always treated the forest with awe and reverence. The woods are a place of mystery and danger; they symbolize the unknown, the untamed, the unpredictable. Yet, the forest is also a place of life, renewal, and healing. The plants that grow wild in the dense woods can be poisonous – and they can be beneficial, too. Fedor Bastard of the Russian band Theodor Bastard knows both sides of the forest, and he’s named his band’s latest album Volch’ya Yagoda: the wolfberry, dangerous to consume, but medicinal, too.

That profound respect for nature and all living things is at the heart of the Theodor Bastard project. The band exists at the intersection of folklore and technology, primordial and futuristic, contemplative and visceral, old and new. These musicians play a startling fusion of Nordic folk, trip-hop, experimental atmospheric and ambient music, progressive rock, and darkwave. They juxtapose synthesizers with classical strings and instruments associated with ethnic folk traditions all over the globe. Sometimes they write in Russian, sometimes their songs are in ancient languages, and sometimes frontwoman Yana Veva sings in a strange tongue of her own invention.

The result is a unique sound made by a fearless group of sonic magicians. “Les” is quintessential Theodor Bastard: a pattern played on a stringed instrument as haunting as the rattle of dry bones, a powerful drum loop that’s almost danceable, synthesizers that drift and hover over the track like clouds of mist, and a seductive vocal performance by Yana Veva that doubles as an incantation. Songs by Theodor Bastard frequently feel like journeys, and this one takes the listener deep into the taiga and acquaints her with the North Russian chill.

Fedor Bastard’s gorgeous but unsettling clip for “Les” contains plenty of footage of the forest during wintertime. It’s simultaneously alluring and forbidding, populated by wolves, frosty, mystical, beautiful, deadly. Like the wolfberry, it contains promise and peril in equal parts: hungry creatures, great boulders, crystal-clear springs. The camera finds Yana Veva among the trees – she’s blindfolded and bloodied, but she still moves with purpose, pulled toward her destination by spectral forces. In one arresting shot, she sings from the dented hood of a crashed truck. She’s been thrown through the windshield – shattered glass is everywhere – but her spirit is unbroken.