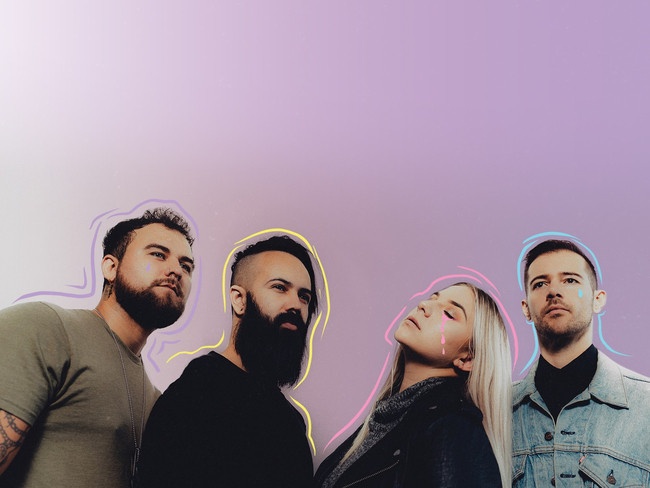 Along with a stunning music video of the same title, dark pop powerhouse RIVALS (RVLS) announced details for their latest full-length album, Sad Looks Pretty on Me, which will be released on March 19, 2021 via Smartpunk Records. RVLS’ new album, Sad Looks Pretty on Me, exists in two worlds. The Los Angeles quartet — vocalist Kalie Wolfe, bassist Sebastian Clarke, guitarist Micket Woodle, and drummer Josh Alves — draw a wobbly line between blossoming pop-rock and wilting post-hardcore, often alternating between sides for earth-shattering effects. By wearing their inspirations proudly (and enlisting the help of contemporaries), RVLS clamor for the attention of both radio listeners and bedroom moshers. Eventually, their explosive live act—which has garnered the attention of audiences nationwide—will wear this new set of songs.

Try this on for size: how many songs have you heard that begin like “Fake Rich,” out of the gate with stuttering percussion, but end up turning the corner with a gnarly breakdown courtesy of Cane Hill frontman Elijah Witt? It’s a perfect distillation of the band’s core ethos: create a club hit, curl it around sneering guitars and urgent drums, tear it down. While this mentality of pop-metal destruction is relentless and well-stocked here, like on the pitch-shifted alt-metal of “On the Loose” and the dirtied, jagged synth-rock of “Little Mistakes,” Wolfe and company are concerned with creation, too. From the ashes of tortuous mental anguish, RVLS always rise to the challenge of confronting demons head on—while fashioning their moods into something irresistible.

Since the release of their debut EP in 2015, titled Haunted/Hunted, the band has been making waves and for good reason. Revered by many on their live performance, RVLS has previously toured the country with bands like The Red Jumpsuit Apparatus, Tillian, and on the ShipRocked cruise. In 2016, Rivals gained mass attention with their unique take on twenty one pilotsʼ track, “Heathens,” which has garnered over 1 Million listens collectively. In 2018, Rivals released their first full-length LP, Damned Soul via Smartpunk Records. Damned Soul garnered an enthusiastic response, with praise from critics at Billboard and over 5 Million streams.