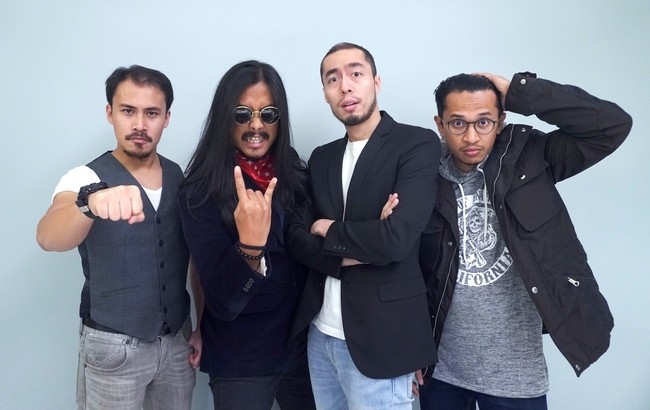 Visitors to Kuala Lumpur are often struck by the city’s awesome verticality. The Petronas Towers – the twin tapering spires that were, for nearly a decade, the tallest buildings in the world – are a fitting symbol for the Malaysian capital. Other architecture is no less ambitious: the SETIA Sky Residences, for instance, reach forty stories into the air, and offer viewers stunning, uninterrupted views of the dramatic KL skyline. What happens in those apartments? In the clip for “SETIA,” the Malaysian-born rockers Shadow Puppet Theatre take us right into the suburban heights of KL and show us an idyllic day in the life of a young, blissful couple. She’s in a headscarf and is likely an ethnic Malay and certainly Muslim; he’s European. Their visibly successful partnership becomes a metaphor for Kuala Lumpur itself – a multi-ethnic metropolis at the crossroads of global commerce.

Few groups represent the spirit of the city better than Shadow Puppet Theatre does. They’re one of the most energetic and creative rock groups ever to emerge from Southeast Asia: a band with a big sound and even bigger hooks, a terrific, expressive singer, and fearsomely talented instrumentalists. On prior songs like “Mystery Girl” and “John Doe,” Shadow Puppet Theatre have drawn from hard rock, glam-metal, volcanic funk, soul, and politically-aware acoustic folk; this is a group that has never thrown away a good idea or shied away from musical experimentation and dark alchemy. “SETIA” might initially sound like a departure – it’s the warmest and most welcoming the group has ever been. Nevertheless, on closer inspection, it’s pure Shadow Puppet Theatre: the mesmerizing guitar playing remains firmly in place, as do the provocative lyrics, the impassioned singing, the tight, danceable rhythms, and the message of optimism, perseverance, and international unity.

To bring “SETIA” to the screen, Shadow Puppet Theatre have turned to frequent collaborator Amen Naqib, whose flexibility, perceptive eye, and sense of color and framing have established him as one of the most notable and accomplished young filmmakers in Kuala Lumpur. Naqib was behind the camera for the “Mystery Girl” and “John Doe” clips, and he imparted a sense of danger and destabilization to every frame. For “SETIA”, he realizes the exact opposite. This is a portrait of a couple very much in love, enjoying each other and the domestic comforts they’ve found in their place in the sky. Naqib adds subtitles to the clip (the song is sung in Malay), but they’re hardly necessary. Everything about the song, and the clip, broadcasts contentment and confidence in the future.