Yes, Kung Fu Hippies is a band name that seems to combine a martial arts movie and the film Easy Rider. The group’s music is not so action-packed or illegal, however. Instead, this song plays out like a sonic call of nature, as ‘back to nature’ was, of course, a big part of the whole hippie movement. Sonically, this unique recording is mixture of a lot of different stylistic elements – all of them, good elements. 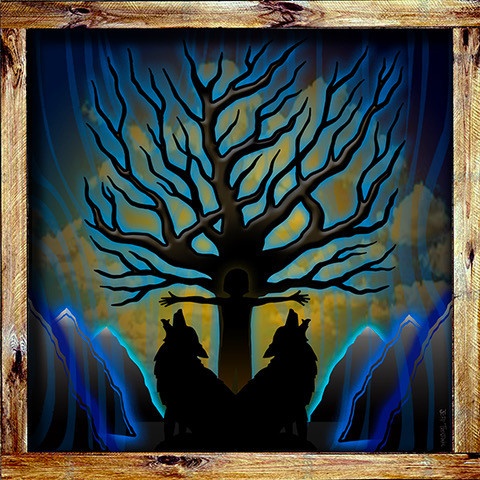 The track begins with a relatively twangy electric guitar riff and a thumping country beat. It’s sung a little bit like a western cowboy folk song. The lyric is laid out in a storyteller’s voice, a little like “Ghost Rider in the Sky.” The singer compares city life, which can tear your heart apart, and the more moral rural realm, where family life was/is stronger. Joni Mitchell famously sang on “Woodstock” about the hippie generation’s need to get themselves back to the garden. On the one hand, this was a cry to move back to nature, but on the other hand, could also be interpreted as going back to the Garden of Eden, in the Biblical sense, which would also incorporate a return to innocence and circling back to the pre-Fall sinless state. Of course, this great song also chronicled the Woodstock concert and Woodstock era, a kind of mass exodus of gathering of hippies.

About midway through this recording, the listener can hear a singer howling like a coyote. This represents a sort of human call of the wild if you will. It’s as though human words cannot ever express this driving need to get away from concrete jungles, to where the animals in nature rule – and likely, rule more justly.

Kung Fu Hippies is a band out of Minneapolis, Minnesota. The group has been together, in various formations, since 2001. The act’s first music created together included jam band covers of – for lack of a better term – hippie music, such as The Grateful Dead, Traffic and Santana. This act includes two – count ‘em – two drummers. And notably, “Northwoods Boy” fades out ominously with pounding drums.

So, what are we to make of Kung Fu Hippies theory? Are cities places that destroy, while nature is the place that heals humans? Or is this more of a wish than a reality? What became of the original hippie generation, for instance? After all, the murderous Manson Family lived outside of town on an old western movie ranch. They were segregated from that ‘evil city,’ yet they still went on to cause murderous mayhem. Okay, perhaps that’s a bad example. However, it’s debatable that the hippie generation created a more just world. It’s more realistic to believe that true moral improvement happens on this inside, within a person’s heart and mind, as opposed to communing out in nature to try and attain the same higher plane.

With that said, though, “Northwoods Boy” is an enjoyable piece of folkish rock music. It may not contain healing powers, but it sure offers a pleasurable listening experience. It’s expressly suited for all nature boys and girls.