What’s the music like in heaven, up there on those puffy clouds, where the sun never sets, and everything is suffused in a golden glow? It’s bound to be melodic – angels love melody – and those tunes will probably be rich and wistful, at once familiar and surprising. It’s likely to be warm, welcoming, and comforting, too; rooted in tradition, smart, well-built, and boasting impeccable compositional architecture. It’ll be something like the songs of Nashville indie pop-rock band Okey Dokey, in other words. When the trio takes to the sky for the video for “Wine Friends,” their latest single, they look, sound, and act right at home. 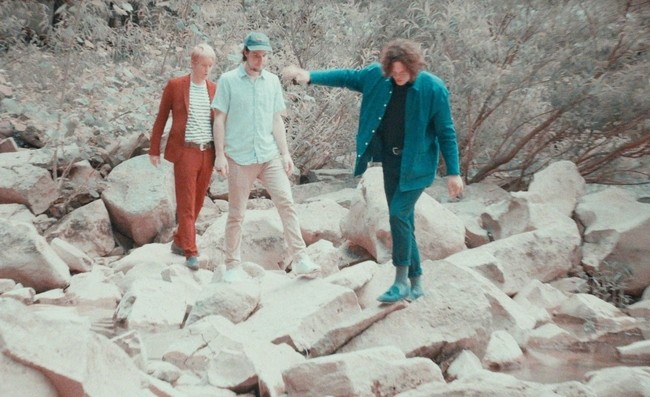 Yet, the members of Okey Dokey haven’t forgotten the most salient point about heaven: to get there, you need to die. If there’s an unmistakable undercurrent of darkness in the band’s celestial music, that’s the reason for it. Casey Pierce’s witty, unsettling clip for “Wine Friends” makes the song’s dimensions visible. All three group members are presented as apparitions in tracksuits, faces covered, dancing their way across beautiful scenery, and, in one marvelous sequence, rising, specter-like, from inert bodies. It’s a dance on the cusp of life and death they’re bringing you – a fantasy of transcendence, of danger, of the great in-between.

Once Upon One Time, the band’s third album, is like that, too. It’s a gorgeous, adventurous listen, beautifully arranged and performed, filled with unusual melodic twists, clever harmonies, and songs that make polite but firm departures from expectation. But it’s also a record filled with ghosts: there are echoes of Nilsson and late-’70s Lennon and Emitt Rhodes in these grooves. Aaron Martin’s lyrics hint at loss and longing. The emotional complexity and nuance of the band’s writing have made Okey Dokey a favorite among writers and other aficionados in Music City – Now It’s Nashville called them “your favorite band’s favorite band in town,” and that’s no exaggeration. On Once Upon One Time, they’ve assembled an impressive roster of like-minded collaborators and true believers in the expressive power of pop-rock, including members of The Shins, My Morning Jacket, Grizzly Bear, and Darkside.

Video director Casey Pierce is another accomplished young artist – one who has shot clips for Torres and Tristen, among others. He’s already developed a distinctive look and a characteristic color palette, favoring pastels and soft, radiant colors evocative of a dream state. His clips already look heavenly, so a trip to the tops of the clouds isn’t much of a reach. But he’s given us plenty of terrestrial footage, too – including plenty of spooky shots that make it clear that “Wine Friends” is no simple reverie.