When it’s done right, pop music shares more than a little with fortune-telling. The pop musician addresses an audience he doesn’t know – yet it’s his or her task to provide clarity for his anonymous listener, and maybe some guidance and encouragement, too. To understand things as they are, the pop musician must have a good idea about where we’re all going. He’s un-fogging the future and transmuting his view of things to come into poetry that speaks to the here and now. 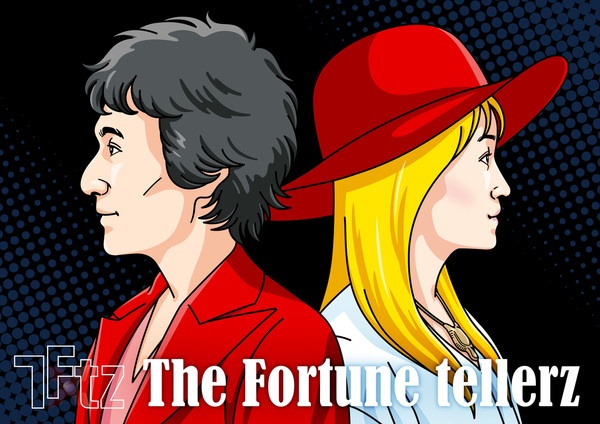 Nicky (aka Yasuto Nishitani), of The Fortune tellerz can speak eloquently to this experience. The author, musician, producer, futurist, songwriter, and soothsayer is an accomplished palm-reader – he’s written 100 books on the topic and sold over 3.5 million copies, as well reading for celebrities like Barbara Walters, Yoko Ono, Margaret Thatcher, and many more – and he’s thought long and hard about the interaction between destiny and determination. Can you alter your course by believing in yourself and opening the door to the birdcage that’s kept you bound? This fortune teller believes that the future isn’t immutable, and “Everybody’s Calling,” his latest single, testifies to his faith.

To bring his vision to life, Nicky has enlisted a talented accompanist. Suzyvision, his main musical collaborator on “Everybody’s Calling,” has a long and distinguished career in Japan – including a tenure in the all-female progressive group Blowin’ Free, one of the first girls rock bands in Japanese history. Since then, she’s played with the wildly popular LEVEL and arranged vocal music for major performances at Nippon Budokan and the New National Theatre. Together with Nicky she’s crafted a song that’s immediately appealing, wildly catchy, and undeniably inspiring. A piece of piano pop-rock as joyous and self-assured as “Everybody’s Calling” could only have been made by a musical pioneer like Suzyvision – and a man like Nicky with one foot firmly grounded in the present, and another stepping, confidently, into the future.

“Everybody’s Calling” practically demands a forward-looking video. Director Azumi Oe has matched the Fortune tellerz’s song with a green-screened clip of tremendous scope: one that draws from the visual language of computer games, travel documentaries, nature specials, and rock concerts. This is a video big enough to include a shot of the entire planet as seen from outer space, but intimate enough to capture the faces of listeners whose spirits are elevated by their encounter with Nicky’s music. It’s a wild and colorful ride – one that takes us far from the drab places to which we’ve grown accustomed, and into a vibrant world to come.