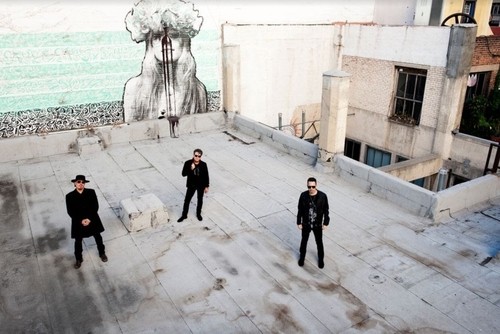 Gothic without being goth; gloom without the doom. LA’s ASHRR are a study in contradictions, with songs born of darkness that propel themselves toward the light. A labor of love from three vets who’ve seen their share of bands, studios, and successes, ASHRR is a project unbound by genre constraints, unrestricted by trend or preconceived notion. Producers Ethan Allen and Josh Charles and singer Steven Davis are making the kind of music you make when the only goal is to make music. Their tense, dynamic brand of darkwave and post-punk finds itself haunting the same back booths as Disintegration’s “Primary,” The Twilight Sad, BRMC, maybe even DIIV. “Waves,” their latest single, is more synthy, introspective escapism, a triumph for a band who wasted no time in carving their name into the LA rock underground.

The trio’s latest follows their 2019 debut album, Oscillator, and last year’s buzz-inducing singles, “All Yours All Mine” and “Don’t Wait Too Long.” Propulsive and primal, it casts aside the restraints of the genres they inhabit. “Waves” is triumphant, and Allen’s production work is the glue that binds the energy, effects, and atmospherics into an adrenalized, cohesive whole. The track steadily ramps up as it rides fuzzed-out, bass-driven verses until the chorus rips the door off its cell and lets the daylight burn the place clean. Sure enough, the band recently told Consequence of Sound that “‘ Waves’ is about life’s struggles, redemption, and the guttural instinct for survival against impossible odds and the realization that by letting anxiety wash over you and pass, you can free yourself.”

The video for “Waves” draws its inspiration from beloved childrens’ classic The Balloon, the story of a young boy chasing a freed balloon through the streets of Paris. Here, director Keith Musil explores themes of imprisonment, escape, and self-determination, as we tag along with a goldfish in the middle of quite the life-changing afternoon. Musil’s worked with Kid Moxie, The Kooks, and Tennis, and here gets the viewer instantly invested in the fate of this forgotten pet. Our hero risks being ingested then suffocated and dashed upon rocks as it repeatedly lands in the hands of different humans with very different intentions for him or her. It’s a cliffhanger of an ending that allows the viewer to decide whether the goldfish remains a captive or continues its journey, and whether living out one’s days in a nice little container of water is all that terrible a fate.