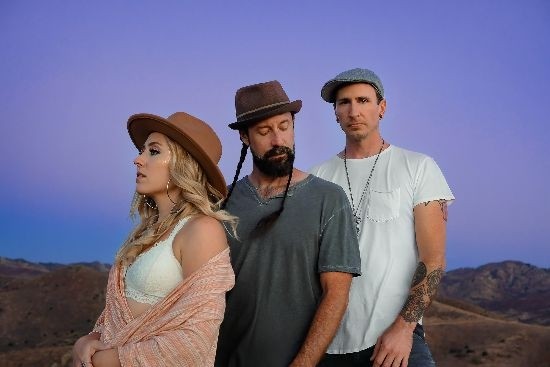 What started out as a Bumble connection turned into a formidable band. When former URB Magazine marketing exec Kyle Mortensen swiped right on Emily Rath’s photo, what he ended up with was the lead singer for the band that he didn’t know he was forming. Add former INCUBUS bassist Dirk Lance to the picture and you have the power trio EAST OF JUNE who are releasing their sixth single “Little Bird” today, September 4, 2020.

A song born out of self-isolation due to the pandemic, “Little Bird” was a unique writing experience for the band. “The song came about during this very strange time in our world and might not have been created otherwise,” says Dirk. “During the first week of quarantine in LA, Kyle decided he better write a simple acoustic song that could easily be recorded and produced given the limitations of everyone being stuck at home. So, he sat outside on his porch and started developing the guitar melody and basic song structure, which led to Emily writing the concept and I shaped the bridge and overall flow and production of the tune.”

A breezy ballad that highlights each of the band members’ strengths – from Kyle’s dramatic acoustic guitar to Emily’s soaring and crisp emotive vocals to Dirk’s Zeppelin-esque bass line, “Little Bird” is a testament of the band’s natural chemistry. Written from a parent’s perspective as their child moves out for the first time, the song carries both the nervousness, hope and trust that all will work out well.