Black Note Graffiti is a five-piece hard rock band, and “Knight” is a short, but hard rocking single. In fact, it clocks in at just shy of three minutes long. Most hit songs range between three minutes and five minutes long, but this song ain’t playing by those rules. In fact, although it’s a single, it’s tough to believe Black Note Graffiti is out to compete with the Cardi B’s and Billie Eilish’s of the world. Instead, this music is aimed at those that like their music loud, guitar-y and rocking. 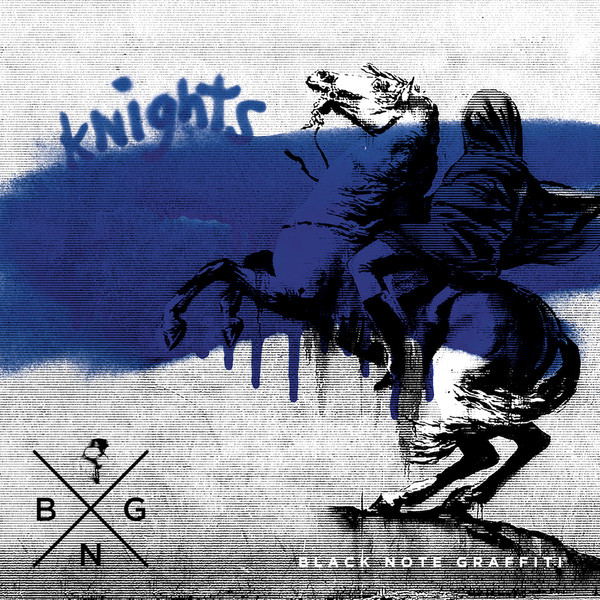 The group uniquely has two vocalists, and each sound to alternate during this track. One is female, Gabrielle, the other male, Ricardo. It begins, though, with Gabrielle. She sings its first words over a chugging electric guitar chord. Her vocal is also given plenty of echo. About a half-minute in, the drums come in – hard, of course – pounding out the beat.

Lyrically, the song states, “We’re taking over your knights.” This is a little unusual because it sounds like they’re singing, “We’re taking over your nights.” However, because the song’s title is “Knights,” one can only assume the former spelling over the latter. With that said, what are they trying to say about taking over knights? Is this a Medieval tale, involving knights in shining armor of some kind? Although the song title strongly implies this interpretation, the music does not. Such a take on the lyric would make more sense when being described by a progressive rock band, instead. Metal leans more toward demons, the devil, and other such evil stuff. Not subject matter of the knighthood.

Later in the song, Black Note Graffiti begins to sing about a knight keeping watch “over you and me.” Is this a superhuman? Could it be an especially protective regular guy? Or might it be some kind of god-like figure? God is described as one that keeps watch over mankind. He is said to never sleep. He is also described as a warrior, so – although it may be a stretch – such an interpretation may just fit.

Melodically, the song doesn’t include a whole lot of dynamics. It gets into a train-like rumbling groove, and basically just stays there from start to finish. There aren’t any screaming electric guitar solos to add variety. That might have been a good idea. Once you’ve heard the song’s first few minutes, you’ve basically heard all it’s going to do. Toward the end, there is some nicely layered vocals. That’s the only alternate element to contrast with the rest of the track.

This leaves “Knight” as a bit of a head-scratcher. It’s well sung and played, but it just sounds like it needs a little more variety to succeed as a single. Also, as it doesn’t lend itself to easy interpretation, there’s not a whole lot that a new listener to Black Note Graffiti can relate to. Sonically, though, fans of bands like Evanescence will likely enjoy the act’s overall sound. The song is as melodic, as it is hard, which gives it sonic multi-dimensionality. And that’s a good thing. In the end, though, the song would have been even better if we’d been given the sense this knight was taking us on some kind of journey.