When we were younger, all we wanted to do was grow up; now that we’re grown up, we want to go back in time. Often, we miss the opportunity to appreciate our youth and childhood. In fact, we don’t even see adulthood coming. Instead, all of a sudden, we’re paying bills and have an unhealthy addiction to caffeine. Not Tamas Bulla; at only 12 years old, he knows his childhood is his pinnacle, and as he approaches teenagehood, he is in no rush to get there. Our worry-free years are slowly slipping away, and Bulla makes sure he revels in every second of it. 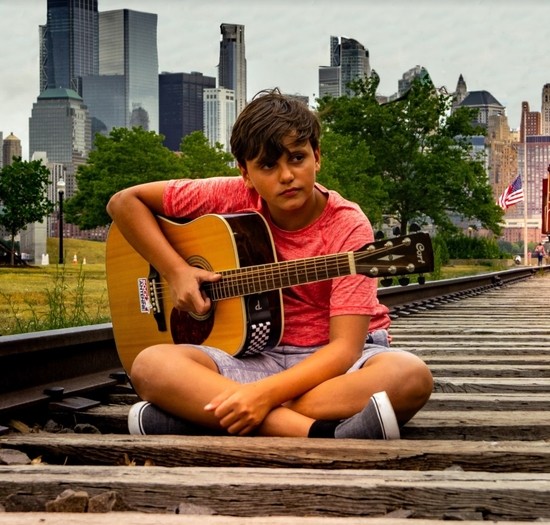 Bulla was never the type of kid to play with guitars; his childhood consisted of going to concerts and making beats by drumming on pots and pans. He was just five years old when he was given his first genuine guitar, and it has only been uphill since. What started as simple guitar lessons at a local central New Jersey Guitar Center, turned into full-fledged music videos right by New York City. His parents are proud Hungarian immigrants, who have worked extremely hard to watch their kids succeed. Bulla diversifies his sound with his drum and viola playing and finds creativity within; all of his inspiration comes from his own emotional expression and awareness.

There are so many unique things that represent adolescence to us, and for Bulla, it’s him and his guitar against the world. In his debut music video for “Out of Time,” he attests to the new challenges that arise as the clock ticks, like the normalized grumpiness of strangers rather than the immature friendliness he was once so used to. Though he might feel alone and scared, his family and friends are always in view to be there for him. His maturity allows his lyrics to strike a chord with listeners and within himself.

Liberty State Park, in northern New Jersey, is one of the chosen sceneries for the clip; it’s a vast open space where families and friends come to decompress. For Bulla, there’s an old abandoned train track that he sits on to reflect on his memories and past years. The preteen thinks of his family’s tenacity and uses it as motivation to sing his lyrics with as much fervor as possible. He stares at the New York City skyline from the Jersey City waterfront, knowing that he will make it there one day. But for now, he’s going to take his time and just admire the view as a kid across the water.