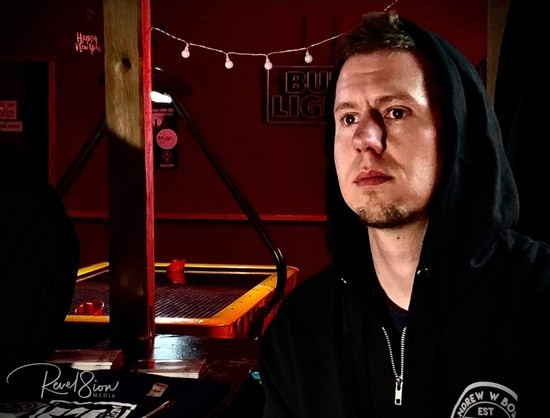 If you’re making music in Salt Lake City, you’re doing it because you love it. Because you have to. Not because there are music execs at every show, or because there’s a scene the world is salivating over. And if you’re killing it in Salt Lake City, it isn’t because of hype, or cool factor, or novelty. Whether you’re punk, rock, or metal, the crowds know the real deal, and they show up. SLC mainstay Andrew W. Boss has kept the rap-metal fire alive by laser-focusing on everything that helped the genre conquer the world in the 90s: sweaty, ferocious live shows that blur the line between the fans and the band; come-one-come-all inclusivity; and raw, relatable lyricism that makes every one of his stories feel like everyone else’s, too. His next album, The Arrival, is slated for release August 14, but until then, “Patience” is here to pound your pandemic blues into submission.

“Patience is killing me this time / I’m subsequently chained down,” Boss sings, which fans may find odd, considering he’s made a name by freeing himself of the go-to conventions of nu-metal. Instead, he’s remained at the top of his game, and the scene, by expertly crafting songs that serve the subject matter. Street-poetic verses that float like a butterfly and sting like a cruise missile. Big, lofty choruses, with hooks that transcend style and genre. The melodic, angular riffs prop up ultra-personal imagery of hard times and heartache, grief, and gratitude. The pain and confusion Boss sings of in “Patience” are magnified by the knowledge that he and his band were just about to join The Nu Metal Revival tour with heavyweights Saliva and Powerman 5000. Covid-19 put an end to that but wasn’t powerful enough to keep a lifer like him down. He made the video in response to the outbreak, reinforcing the track’s message of resilience and refusal to be defeated.

Boss recently told Alternative Press that the band barely got their last show in before the Great Cancellation of 2020. It was an end-of-tour hometown high note with Hed P.E. on February 22. He continued, “I think music and concerts are very important for society and people, in general. People need a break from real life as often as possible, and concerts are a great positive outlet. I wish more concerts and touring were happening right now.” As director of the video, he wanted to replicate both the positive energy of his band’s live shows and the current catatonic state of live music in America. Rowdy, energetic concert footage is spliced with more melancholy shots of Boss wandering the empty, silent SLC clubs he usually packs out. The video ping-pongs between somber and celebratory, acknowledging where we are, while raising the Rock Horns to where we know we’ll soon be again.