It doesn’t matter who you are, or how well you’ve appointed your sheltering place – if you’ve committed to “stay put” for months on end, you’re bound to go a little stir crazy. In a year as strange as 2020, that’s been a disheartening and common experience. But singer-songwriter, actor, and writer Paul Helou knows that making that sacrifice is in support of the heroic efforts of those who continue to face the pandemic head-on. He’s not a doctor, nurse, or a public health professional. Nevertheless, he knows he can do his part by taking care of himself and those around him, limiting contact, and singing the praises of the brave women and men who’ve acted so heroically during the most challenging times any of us can remember. 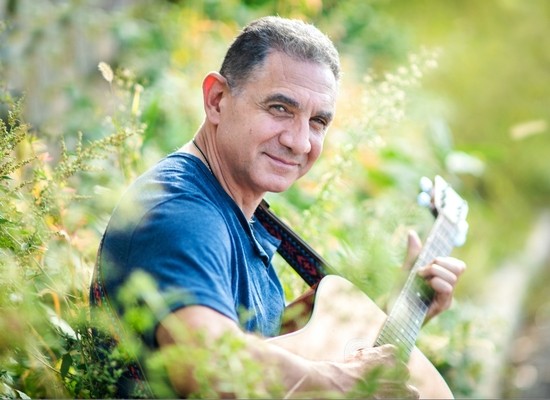 An award-winning, seasoned performer and songwriter, Helou is a specialist in good cheer: a witty, good-natured, and subtly incisive writer whose uplifting work reaches listeners of varied ages and all kinds. “There Are Heroes (Stay Put Blues),” his latest project, is written for everybody who has endured a quarantine period – just about the whole planet, in other words.

“During an extremely challenging and uncertain time, when the temptation to give in to bleak thoughts constantly came up,” Helou recalls, “I knew I had to dig deeper into a heartfelt, creative project – one that would involve a team of creative musicians and consultants to shine light and share good vibes.”

\Adept at spreading good vibes for younger audiences, Paul Helou might be best known for his Parents’ Choice Award-winning music for kids. Bears, Bees & Butterflies: A Musical Journey with Paul Helou is the sort of children’s record that parents enjoy, too – a wry, intelligent, and inviting one which allows him to demonstrate his rare sensitivity and considerable musical range. Though he’s never ostentatious about it, Helou is a skilled and flexible player, and he’s equally comfortable with jazz, blues, bluegrass, country, and modern pop, too (he’s got several general audience recordings in the works).

In his varied career – which includes a stint as a freelance journalist writing feature articles for The New York Times and others – Helou has worked with musicians of many different styles and backgrounds. In his forthcoming general audience release, his backing musicians include Garth Hudson (The Band), John Sebastian (The Lovin’ Spoonful), Harvey Sorgen (Hot Tuna), and bluegrass/Americana luminaries such as fiddler Stuart Duncan, multi-instrumentalist Joe Craven (David Grisman, Jerry Garcia), and others.

A song like “There Are Heroes” virtually demands a Zoom-like format, a chance to bring people together and harmonize on behalf of global healing, and Helou and his team of collaborators don’t disappoint. He hasn’t just chosen excellent instrumentalists: he’s picked people who are just as endearing on camera as he is. It takes a lot to project warmth and low-key, welcoming charisma from a tiny teleconferencing box, but every single one of these artists manages to do just that. The focus is on Helou himself, of course, but he gives plenty of centrality to his pals, including whirlwind drummer/percussionist Christian Teele (who appears in one frame on the congas, and another on a full kit!), dazzling pianist Josh Shilling, and the wildly expressive singer Devyn Rush. They come from Tennessee, California, Argentina, Italy – worldwide, but united in compassion. Commenting on the lighter side of the video, Helou notes, “Yes, I really do have three plants called Larry, Curly and Moe. Moe was a little reluctant to be part of the production, but we worked it out in the end. I think he’s almost done with that Faulkner book.”

“There Are Heroes” is currently making its rounds on the international film festival circuit and is already getting positive responses as a finalist in The New York International Film Awards and the Prague International Monthly Film Festival, semi-finalist in the Moscow Film Party, and selected for consideration in several festivals in the U.S.