If you’re into Canadian singer/songwriters, Francine Honey is an artist that needs to be on your radar. For the past few years, Honey’s music has been becoming increasingly difficult to avoid if you keep up with the pastoral beats of the Great White North, and looking at the pair of new videos made for her latest release, the double single “I Carry On,” it’s not that hard to figure out why. Whether on her own or in the company of an esteemed player like Robert Gray, she’s got a way of owning the attention of anyone within earshot of her harmonies. 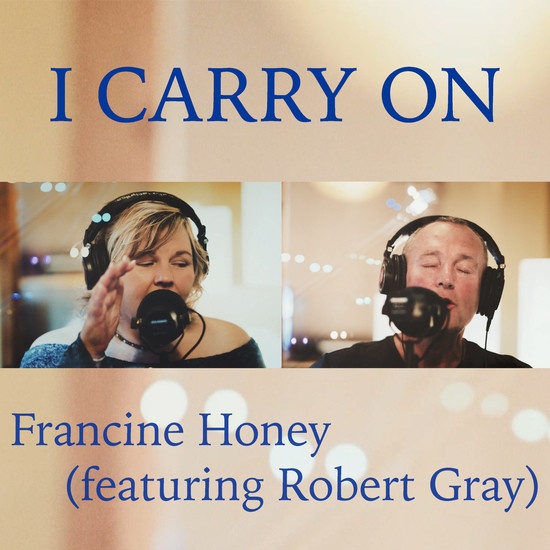 There’s no filler in either of the two versions “I Carry On” is available to us this May; on the contrary, I think they represent some of the most efficient songcraft Francine Honey has stuck her name on since first hitting the scene. It’s obvious that she’s got a lot of experience under her belt, and I don’t think you need to be familiar with her total body of work to pick up on the emotional investment she’s putting into this material. She never holds back when the mic is in her hand, and that’s made all the more true here.

Robert Gray is, in more ways than the obvious, the perfect complementary crooner to Francine Honey (especially in a slow-rolling ballad like this one). Their musical charms are maximized by a joint love of the old fashioned country/western model, but I wouldn’t say their performance in the duet version of “I Carry On” is some sort of tribute to classic Americana. There’s an edgy Canadian pop finish to this song that prevents it from sounding genre-specific, which is probably the main reason why it’s being acclaimed for its versatile appeal this month.

I would have liked just a touch more focus on the string parts amidst the duet between Gray and Honey, and in all honesty I don’t think it would have drowned out even a bit of their vocal harmony’s overwhelming dominance in the mix. It’s a slightly different conceptual approach than the one they wanted to take in this instance, but the fun thing about a song like “I Carry On” is getting to debate all of the different ways it could be broached in a live setting or remix. Honey isn’t about to be pinned down to one narrative here, and you don’t have to be a critic to recognize that.

Though I have definitely been a fan of Francine Honey’s for a while, I think this release is going to up her credibility in certain circles beyond what she was expecting to see this late spring. American audiences are undisputedly going to eat something like this up, but more than that, I can see a generous amount of international favor coming her way from other corners of the world embracing easy beats at the moment. She has a whole market of support behind her, and you needn’t wonder why if you’ve heard “I Carry On” even once.