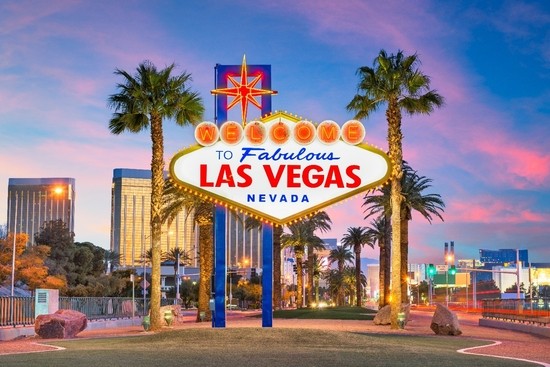 Nowadays, around 50 million people from around the globe visit Las Vegas on an annual basis, and, of course, the mega-casinos that litter – and light up – the famous Vegas strip are the main attraction. Punters have the ability to play their favourite casino games – like Roulette, Blackjack and Slots – no holds barred, in around 30 casinos along the four mile long Las Vegas Boulevard! However, this wasn’t always the case. So, let’s take a look at the history of Vegas’ famous casino industry.

Spanish for ‘The Meadows’, Las Vegas got its name from a group of Mexicans who used to rest there, as it was on the trade route on their way to Los Angeles. Vegas was still Mexican territory at this point – it only became a part of the US in the mid-1880s.

Gambling became a regular hobby of people passing through Vegas during this era – despite the act actually being outlawed. Towards the back end of the century, however, in 1869, the shackles fell off and gambling became legal.

The legalisation of gambling didn’t last long though, as a legislation banning games of chance was later passed in 1909. But, it comes as no surprise that this didn’t stop punters from gambling illegally in Vegas.

Now, fast forward another 22 years, to 1931. This was a massive year in Las Vegas’ history, not just because gambling was made legal once more by the Nevada government, but because construction started on the Hoover Dam – originally known as the Boulder Dam. This brought workers to Vegas, which fundamentally increased the demand for gambling and casinos.

With gambling made legal, building began to make Las Vegas the casino hotspot it still is today. Thomas Hull – who already had hotels in San Francisco and Los Angeles – opened the first hotel-casino – ‘El Rancho’ – on the Vegas strip in 1941.

Although, it was Bugsy Siegel – a New York gangster – who really shot Las Vegas onto the global stage. Five years after the opening of Hull’s ‘El Rancho’, Siegel opened The Flamingo – which still sits on the Vegas Boulevard to this day. The mobster was murdered just one year later, but the expansion of Vegas carried on as fellow gangsters were expired by Siegel.

Vegas continued to grow in the second half of the 20th century, not just in the number of casinos popping up along the strip, but the size of the resorts as well. Circus Circus, Cesar’s Palace and the Golden Nugget all opened their doors in the ‘60s, whilst Hotel entrepreneur Howard Hughes – who was a regular visitor of Vegas – and the entertainment group The Rat Pack – which included the legendary singers Frank Sinatra and Dean Martin – also helped to change the image of Las Vegas for the better.

Towards the end of the 1900s, the iconic Vegas hotels that we know and love today, such as the MGM Grand, Paris, the Bellagio, New York, New York and the Venetian, were built.

Vegas still continues to grow today, with the impressive ARIA – which has Vegas’ largest Slots floor – and Vdara opening in 2009, whilst Encore and the Cosmopolitan followed a year later. Vegas will continue to grow in the coming years with at least four more resorts scheduled to open along the strip by 2023.