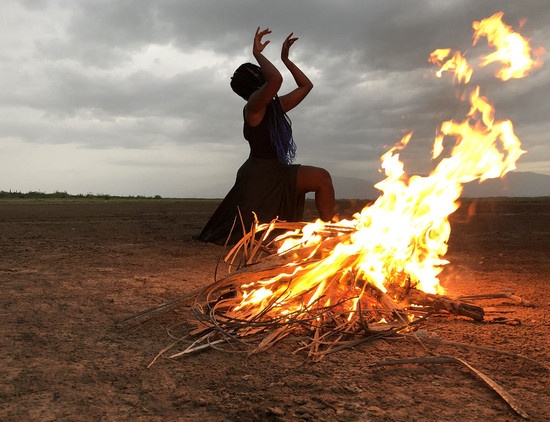 “What kind of people try and tell you who to love?”, asks singer and activist Malou Beauvoir in the searing first verse of “Nwaye,” her latest single. “Do they think they’re wiser,” she continues, “than the Gods above?” From one angle, this couplet is a straightforward protest with a specific referent: discriminatory laws under consideration in the Haitian legislature that would strip rights from LBGTQ citizens. Beauvoir uses her platform to speak out against injustice, and we’re better for it. But the artist is singing about something bigger than any one prohibition in any restrictive bill. She’s asking decision-makers to proceed with humility – and to understand that no matter how powerful they feel they are, their earthly power pales in comparison with the divine and cosmic.

That’s the message she sends all over SPIRITWALKER, her radiant, quietly incendiary album, and it’s one that’s particularly relevant during times of global crisis. Beauvoir’s soulful, propulsive, and deeply beautiful songs always double as humble prayers. When she reaches out to the Vodou spirits, she’s not merely doing so to connect to her Haitian heritage. She’s looking to the Gods for guidance, and maybe a little retributive justice, too. The slow-burning “Nwaye” is a message to Erzuli, the spirit of love – but even the gentle Erzuli is known to express impatience with those who spread hate and division instead.

In creole, the word “Nwaye” implies drowning, and the song’s narrator is overwhelmed by the deceit and misdirection of the authorities. But everything about Beauvoir’s performance is steely, and determined, and, ultimately, hopeful. Malou Beauvoir sings like someone who has righteousness on her side – and maybe the Vodou spirits, too. Her characteristic amalgam of North American soul, Caribbean sweetness, Haitian traditional music, and international pop has never been more seamlessly integrated as it is here, and it’s all put to the service of a very good cause. The clip features dancer and choreographer Raphaëlle François, whose portfolio ranges from performances and workshops in prestigious institutions such as Tokyo National Ballet , Quartier in Paris, Carnegie Hall in New York, the Ballet Hispanico in New York, the Ballet Roto in Dominican Republic, in Cyprus, Jamaica and much more, where she promotes Haitian culture.

Those who’ve followed Malou Beauvoir know that she always cuts an impressive figure in her videos. Although there’s also plenty of footage of Haitian protest movements and the ordinary acts of kindness and resistance in the “Nwaye” clip, the star is the focus. At the beginning of the video, the lightning flashes, and the dark clouds threaten to overwhelm the Haitian plain. But by the end, Beauvoir stands, boldly, by a waterfall. She doesn’t deny the power of natural forces. Scary though they are, she trusts that they’ll sustain her – and her causes, too.