“Musical instruments are beautiful objects. They possess a peculiar power, too: they can confer some of that beauty on the people who play them. No musical instrument is any more gorgeous to behold than the harp is – and when IVEEN sits in front of hers and readies herself to pluck the strings, we think you’ll agree that it’s as striking an image as any special effect. Once she begins to play? Well, as the “Orion” video shows, that’s loveliness in motion. 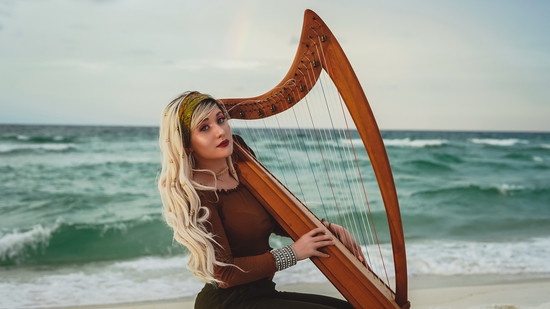 But while IVEEN’s instrument is known for being soft and angelic, her approach to it isn’t delicate in the slightest. The Atlanta singer, songwriter, and harpist throws herself into her performances and her composition with abandon, and she follows her muse into uncharted territory. For starters, IVEEN often runs her harp through the sort of effects usually employed by rock guitarists – effects that enable her instrument to be heard, loud and clear, over the roar of the band. She also loves to juxtapose the organic sound of the harp with electronic programming, digital loops, and dreamy synthesizers. It’s a play of textures she’s after, an unprecedented amalgam of orchestral delicacy and modern sizzle, and “Orion,” her first single, demonstrates that she’s already captured what she’s chasing.

IVEEN is also a dazzling singer: one able to move between pop immediacy and near-classical grace at will. All of her talents are on display on “Orion” – her empathy, her musical intelligence, and her unerring ability to draw listeners into her stories. The song moves from a twinkling verse decorated with harp arpeggios to a chorus enlivened by thunderous percussion. Throughout, IVEEN never loses her balance, or her sense of direction, or her gentle command over the song.

In the lyrics to “Orion,” IVEEN’s narrator looks to the stars and constellations to augur her fate. In the video, the skies answer back. As IVEEN plucks her harp in a series of stunning locations – including a white-sand beach and a mountain top with pools of water– meteors crash from the heavens to the earth. These aren’t simple space stones, either: they’re treasures from beyond the stratosphere, and those who recover them are duty-bound to wear the gifts bestowed upon them by fortune. They’re necklaces made from captured starlight, and before long, the men and women lucky enough to find them are gathered together in a circle, dancing, drumming, and celebrating the setting of a magnificent orange sun. It’s a dialogue between earth and the stars that IVEEN is entertaining us with here – a harp-spiked pop song that plays like a rhapsody.”