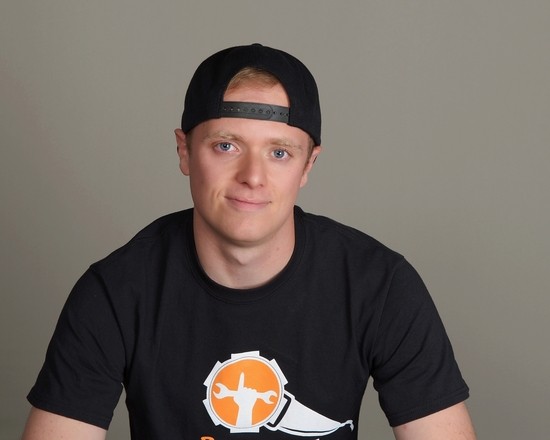 Twin Cities rapper Reverse Mechanic is more than handy with a beat, not to mention a studio’s worth of instruments, but he’s a lyricist first and foremost. He knows his way around a narrative, and with his Best Proposal Ever LP, he’s putting his skills to the test both in the considerable size of the story he’s telling, and his deeply personal attachment to it. But don’t call it a concept album because this is real. His melodic sing/speak flow has a serious positivity, playing with words without playing around. He’s influenced by the best elements of rappers on the verge like Classified and Kinetics & One Love, as well as game-changers like Chance The Rapper. His handle is a nod to his engineer’s approach to wordsmithing: he breaks language down and reassembles it, making it strike new chords and resonate in surprising ways. “Run” finds Reverse Mechanic looking nowhere but forward, as he chronicles his recent courtship and proposal.

It’s easy for an artist to look at a life change like falling in love and popping the question as something apart from, even a priority over, their career. What’s not easy is turning that incredible life experience into a full-length album and an accompanying 22-minute video. (And what a payoff at the end!) “Run” falls roughly in the middle of the courtship, and there’s a high-wire energy throughout, a conviction that makes every bar hit the bullseye. The track casts Reverse Mechanic’s net of influences even wider, with a tuneful pre-chorus that wouldn’t be at all out of place somewhere on Modest Mouse’s Good News for People Who Love Bad News. It’s a joyous proclamation that wherever his love goes, he’s going to be right there with her.

The clip for Best Proposal Ever is one unbroken music video for the eight songs on the album that Joe (our fearless Reverse Mechanic) wrote as the run-up to proposing to his one and only, Angela. “Run” sees Joe and Angela still dating, the knee not yet bent, and is set during one of their shared adventures. In between shots of an unsuspecting Angela boating, hiking, and road tripping, we follow Reverse Mechanic rushing across town to an event he clearly can not be late for. He races block after block, reciting his rhymes as though they were vows, a man on a mission. If, in the end, you find the suspense is killing you, just imagine what Joe is going through.