Few things carry the same symbolic freight as a train does. Trains mean arrivals and departures, greetings and goodbyes, transit between states of being. They connote the irresistible march of industry, and as they roll through vast wilderness, they remind us that much of nature remains untamed. No, there’s nothing like a train – and there’s no musical instrument as closely associated with the train as the harmonica. 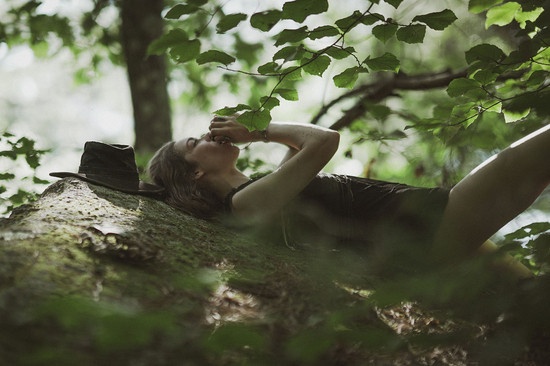 Few modern players working in any genre are as committed to exploring the expressive possibilities of the harmonica as Howlin’ Whale is. She plays harmonica to evoke sounds of wild environments: strange bird calls, frogs, insects, trains, and waves crashing. In the sinuous verses of “Many Lives,” Howlin’ Whale sings of the train echoing through the woods where she grew up. The “Many Lives” clip shows the train track she spent her childhood wandering along. She sings of her wanderlust, of trips she’s taken and those she has yet to take, and of the human need to explore. The video culminates with a train, streaking by the sea toward an unknown destination. The new track is a deeply personal fusion of swamp rock, rustic folk, small-town blues, and heavy, earthy one drop rhythm. It’s all held together by Howlin’ Whale’s yearning voice and the ethereal sound of her mouth harp.

The train is hardly the only potent symbol in the clip. Howlin’ Whale is attuned to the signification of all things, and she puts the full range of her iconographic understanding on display in “Many Lives.” In this gorgeous, stealth-sexy video, which the artist directed herself, she provides dramatic footage of the ocean, with its vastness and its eternal qualities, the deep woods, with its mystery, and the bog, bubbling over with life and the promise of rebirth. Howlin’ Whale is our guide through the cycles of nature, and she’s a generous one – smart, compassionate, and grounded, even as her eyes are on the stars. She delivers much of the song sitting on a rock in the Bubbling Bog, the swamp in the woods where she grew up. It’s animalistic and spiritually evocative, and it’s designed to linger in the memories of viewers long after the video is over.

All of the songs on the Many Lives EP are similarly provocative. This is psychedelic music in the truest sense: thought-provoking, boundary-breaking, shape-shifting, cosmic in scope and mesmerizing in its intensity. She’s attracted imaginative musicians to her project. Artists as disparate as songwriters Fire Mist, Taylor Quinn, Kosmic Geckos bandleader Kavika G, funk bassist M.Cat Spoony, and jazz phenom Tyler Hammond have joined forces to bring her vision to life. They’ve all felt the same magnetic pull that thousands of fans have – a force that Howlin’ Whale generates every time she plays.