In an era of political uncertainty, it’s always refreshing to hear a band that doesn’t mince words. Unlike their namesakes, The Elected Officials will always let you know exactly where they stand. They’re carrying on the tradition of forceful, outspoken, egalitarian punk rock, and doing it at a time when true voices of protest are in short supply. Quick, pithy, passionate, straight to the point, and hard to resist: their songs are like that. Their arguments are, too. 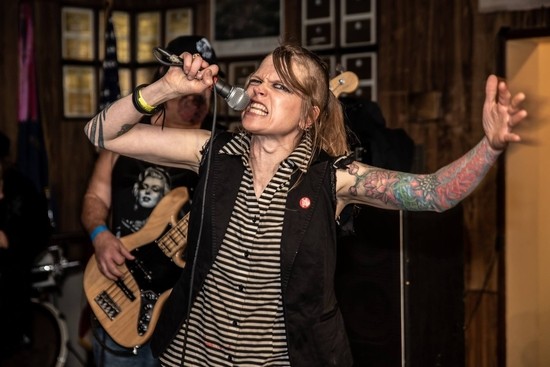 They’ve taken their stand in Austin, Texas – a city famous for nonconformists and believers in the power of the people. The Elected Officials have quickly become one of the most respected independent bands in a town of thousands of independents, and a reliable source of pointed, polemical, wonderfully catchy punk rock. If you’re looking for a soundtrack to your personal insurrection, or something to play as you take to the barricades, you’ve found it.

“Death For Sale” has all of the hallmarks of an agitprop classic. It comes on like a bottle-rocket burst, it burns hot and fierce, and singer Sophie Ruckus spits out the words with venom and absolute conviction. It’s the military-industrial complex and institutional violence Sophie is decrying, and every broadside hits the target. In two minutes of incendiary punk, The Elected Officials draw the connections between nuclear arms, lobbyists, slashed school budgets, inertia, alienation, and modern paranoia. Our actual elected officials should be half as succinct – or as honest.

The new track takes its place in a songbook filled with unsparing anthems, trenchant critiques of contemporary culture, and shout-along choruses meant to inspire the masses. Death For Sale, the group’s latest set, is, among other things, a rallying cry for all those tired of oppression and institutional violence. But it’s not just sloganeering: The Elected Officials have done their homework, naming names, calling out Monsanto and the NRA, and praising the Black Panthers and the Zapatistas. And they’ve backed up the rhetoric with real political action, working with the Coalition to End Gun Violence and the #nokidsincages campaign. It’s no wonder that they’ve been recognized as fellow travelers by legendary political punks MDC, with whom they’ve toured and released a split EP.

The “Death For Sale” video is just as confrontational as the Elected Officials’ sound: the imagery is stark, powerful, and occasionally brutal. But it also showcases the group’s tremendous stage presence and camera awareness. They want you to change the world – or at least your neighborhood. But they also want to make sure you have fun while you’re doing it.