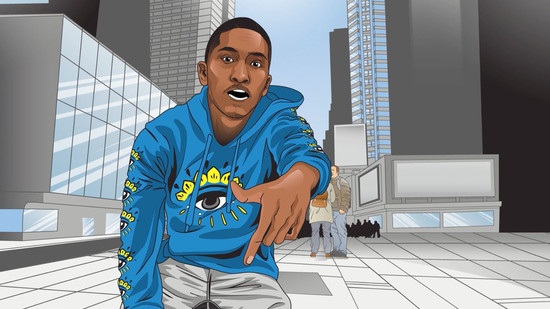 Coming from Harlem in New York City, Riley is an up-and-coming rapper. But he’s not just a rapper: he’s an athlete, an actor, an unintentional comedian, and most importantly, a dream chaser. A fan of real hip-hop, Riley is influenced by the latest and greatest, taking after the likes of Jay-Z, Meek Mill, Dave East, Don Q, Lil Uzi Vert, Tee Grizzley, and 21 Savage. This impressive, hard-working artist was also featured on Wyclef Jean’s Carnival III. He loves rapping, writing music, beautiful girls, and wearing Air Jordans, Nikes, and Bape.

Like his previous video, “The World Is Yours,” “Fasho” is set in New York City – only this time, the visual is animated. “Fasho” is the first hint of Riley’s upcoming album First Quarter, and it’s already airing on BET Jams. Directed by Maddisays and animated by Food Fight Studios, the video opens with Riley on a park bench, and we get glimpses of him in a “ROSÉ” hoodie from his merch collection, while Lil Riley, his alter ego and main character for the Roséfam merch collection appears next to him. Does he make it look easy? Fa sho. But is he gonna slay? Yeah, that’s fa sho.