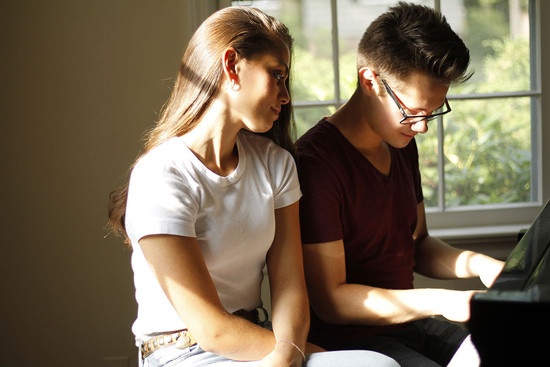 John Paciga is one of those rare incarnations of musicality, creativity, and ambition that burn with the intensity of a supernova. And it’s hard to look away, as the songwriter, pianist, singer, and actor is magnetic – and the Annandale, NJ native is only 19. As the musical director of Yale’s century-old a cappella legends, The Yale Spizzwinks(?), he’s honed his vocal cords and performance chops to a fine point alongside some major raw talent. That much is clear when any of his songs leaps out from behind his piano. He wasted no time getting right to the good stuff as a kid, and the influence of piano-pop legends Billy Joel, Ben Folds, and Jukebox the Ghost is apparent. Paciga’s larger-than-life theatricality, however, vaults him into territory that is refreshingly all his own. Paciga wrote “No One Else” fresh off a summer tour, and that post-performance buzz, that lightning-in-a-bottle energy, is evident.

The inspiration to pen a love song struck Paciga in the middle of a creative burst that saw him write half his new album in just a few weeks. But songs about the pains of romance are a dime a dozen. Everyone loves a good tear-jerker about heartbreak, but sometimes things are just good – and doesn’t that deserve its own rousing piano-pop rocker too? Paciga’s upcoming album Still Got Me also needed a duet, so with the help of Lexi Pappas’ incredible vocals, the stars aligned. Composed by Paciga and produced alongside fellow NJ native Kyle Frey, “No One Else” feels like a killer number off a Broadway soundtrack. It’s full of ridiculously catchy hooks, guitar crunch, and lyrics that’ll either make you want to be in love or root for anyone who is. It’s an upbeat, uplifting single that never lets up, and never gets old.

Paciga did double-duty as star and director of the video, filmed and edited by Joey Perez. Together, they set up a great companion narrative to the song’s “Everything is actually just fine” message. Like any musician-type, John oversleeps on the morning of a big show with Lexi. Luckily, she’s the brains of this duo, and she gets him up and at ’em with one phone call. Infamous Jersey traffic threatens to derail the entire event as John high-tails it to the theater, and Lexi anxiously awaits. As the clock ticks and the tension mounts, the clip cuts back to Paciga and Pappas in a rehearsal space belting out the tune with high emotion and genuine elation. They sit at that piano like they’ve been doing this for ages – think Stevie Nicks and Don Henley doing “Leather And Lace” or the original leads of Rent knocking “Tango: Maureen” out of the park. It’s doubtful that John’s ever let a crowd down, but there’s a first time for everything, so keep your fingers crossed as the clock ticks in his clip for “No One Else.”